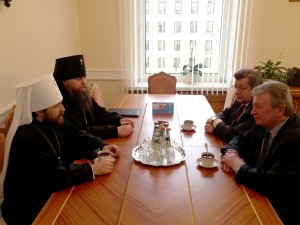 On 5 April 2013, Metropolitan Hilarion, who stayed in Belarus with the blessing of His Holiness Patriarch Kirill of Moscow and All Russia, visited the Presidential Administration and met with its deputy head, Mr. Alexander M. Ratkov.

They were joined in the meeting by Archbishop Guriy of Novogrudok and Lida, chancellor of the Byelorussian Exarchate, and by Mr. Leonid P. Guliako, commissioner for religious affairs and nationalities at the Byelorussian Council of Ministers.

Discussed was preparation for the celebration of the 1025th anniversary of the Baptism of Russia.

That same day, the DECR chairman, being accompanied by archpriest Feodor Povny, visited the “House of Mercy” and Memorial Church of All Russian Saints.