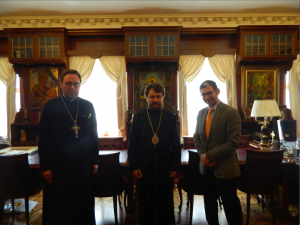 On 19 July 2013, Metropolitan Hilarion of Volokolamsk, chairman of the Moscow Patriarchate’s Department for External Church Relations (DECR), met with Mr. Luca Volontè, who till last June was chairperson of a political group of the European People’s Party in the Parliamentary Assembly of the Council of Europe.

They were joined in the meeting, which took place at the DECR premises, by archimandrite Philaret (Bulekov), DECR vice-chairman.

Discussed were problems of cooperation among political, public and religious leaders and organization in defending traditional moral values on the European continent. Metropolitan Hilarion told the guest about activities of the Russian Orthodox Church in this regard.

Mr. Volontè informed Metropolitan Hilarion of numerous actions in defence of traditional family and human dignity undertaken in European countries in recent months with participation of many hundred thousand people.

Metropolitan Hilarion and Mr. Volontè underscored the importance of inter-Christian and inter-religious dialogue for the achievement of understanding in society and discussed prospects of common actions.