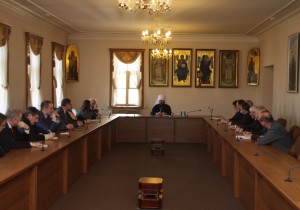 On 22 April 2013, Metropolitan Hilarion of Volokolamsk, chairman of the Moscow Patriarchate’s Department for External Church Relations (DECR), met with participants in the Higher Diplomatic Courses of the Diplomatic Academy of the Russian Ministry of Foreign Affairs with the blessing of His Holiness Patriarch Kirill of Moscow and All Russia. The meeting took place at the DECR premises.

Taking part in the meeting were heads and staff members of the Ministry’s Departments and representatives of the Diplomatic Academy.

The DECR chairman greeted the guests and told them about external activities of the Russian Orthodox Church. He said, in particular, that among the DECR’s priority tasks was maintaining and developing fraternal relations with the Local Orthodox Churches. Then Metropolitan Hilarion told those present about the Russian Church’s current relations with the Roman Catholic Church and with other Christian confessions, and about the efforts that the Russian Orthodox Church makes in order to unite compatriots living beyond its canonical territory. Among the issues touched upon by the DECR chairman in his speech, was the role that the Moscow Patriarchate has been playing in the international arena: Metropolitan Hilarion told about the Orthodox witness on topical issues at the level of international organizations, such as the United Nations, Council of Europe, Organization for Security and Co-operation in Europe, and others.

At the end of the meeting, Metropolitan Hilarion answered questions from the audience.