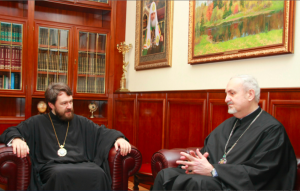 On 18 June 2013, Metropolitan Hilarion of Volokolamsk, chairman of the Moscow Patriarchate’s Department for External Church Relations, met with Metropolitan Emmanuel of France, Patriarchate of Constantinople, President of the Conference of European Churches (CEC) and the Revd. Dr. Guy Liagre, CEC General Secretary.

They discussed the problems related to the suspension of the Russian Orthodox Church’s membership in the CEC. The CEC leaders expressed their wish to see the Moscow Patriarchate as a CEC active member again. According to Metropolitan Emmanuel, Orthodox witness is essential in the context of inter-Christian relations today. He remarked that these relations became complicated after some Protestant Churches had introduced certain practices that run contrary to Christian moral dogma. CEC President thanked Metropolitan Hilarion for the contribution to inter-Christian dialogue and for active participation in its fruitful development.

CEC General Secretary, the Revd. Dr. Liagre shares Metropolitan Emmanuel’s opinion that some Protestant Churches carry matters too far. Inter-Christian dialogue needs spirituality that the Orthodox Church keeps and cherishes. He believes in the necessity of common search for the solution of controversial problems so that Christian witness in the contemporary world can be convincing.

Metropolitan Hilarion warm welcomed the guests and thanked them for their wish to have the Russian Orthodox Church a full member of the CEC. He underscored that the ecumenical movement has come into being as a tool for bringing Christian Churches closer together; yet at present one can clearly see that many Protestant communities are departing from the ideals and teaching of the Early Church thus moving way from Orthodoxy. Orthodox Christians perceive these Protestant communities as alien to them, and often enough we cannot reach mutual understanding with the Protestant Churches of the Western world. Yet, the Russian Orthodox Church has no disagreement with the Protestant Churches of Eastern Europe on ethical problems.

The DECR chairman told the CEC leaders about the recent visit of His Holiness Patriarch Kirill to Estonia and its results. He noted that non-admittance of the Estonian Orthodox Church of the Moscow Patriarchate to the CEC membership constitutes the only obstacle to the renewal of the Russian Church’s participation in the activities of this inter-Christian organization. The situation, in which one Orthodox Church in Estonia has been admitted into CEC membership, while the other has been denied it for unknown reasons, is unacceptable to us, Metropolitan Hilarion underscored.

Metropolitan Emmanuel agreed that the admittance of the Estonian Orthodox Church of the Moscow Patriarchate is a complicated problem and needs time for solution. At the same time, he believes, one should try to prevent the situation with relations between the two churches from exerting negative influence on the inter-Christians relations in Estonia and in the entire Europe. The Ecumenical and Moscow Patriarchates should resume work for the solution of the Estonian problem.

The participants in the meeting expressed their unanimous wish to work over the removal of obstacles for the sake of the renewal of cooperation of the Russian Orthodox Church with the Conference of European Churches.