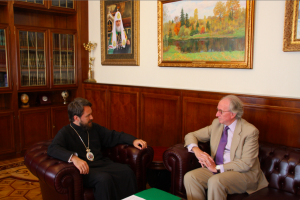 On August 20, 2012, Metropolitan Hilarion of Volokolamsk, head of the Moscow Patriarchate Department for External Church Relations (DECR), met at the DECR with the Ambassador of the Kingdom of Spain to Russia Mr. Jose Ignacio Carbajal Garate. Participating in the meeting were also Archpriest Sergiy Zvonarev, DECR secretary for the far-abroad countries, and Mr. M. Palacio, a DECR staff member.

During the meeting, which was held in a friendly atmosphere, Metropolitan Hilarion told his guest about the ministry of the Russian Orthodox Church in Spain and her pastoral care of compatriots living there. He also expressed interest in the development of student exchanges and pilgrimages between the Moscow Patriarchate and the Catholic Church in Spain.

On his part, Mr. Carbajal Garate noted the weighty contribution the Russian Church made to the life of Russian society. The both expressed concern for the crisis processes taking place in Europe today. Metropolitan Hilarion expressed hope that the Spanish people would remain faithful to the Christian heritage and traditional moral values.

They also discussed a number of problems of mutual concern.