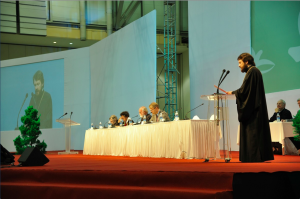 On November 1, 2013, Metropolitan Hilarion of Volokolamsk, head of the Moscow Patriarchate’s department for external church relations, delivered an address at a plenary session of the 10th General Assembly of the World Council of Churches, taking place in Busan, South Korea.

The WCC remains to this day a unique instrument of inter-Christian cooperation that has no analogy in the world, said Metropolitan Hilarion, who leads the delegation of the Russian Orthodox Church to the WCC Assembly.

In his address, the DECR chairman spoke on major challenges faced by the Christian world today. Among them is the militant secularism which is gathering strength in Europe and America as it seeks to expel religion from public life and to reject the basic moral norms common to all religious traditions. One of the main directions of its activity today is the straightforward destruction of traditional notions of marriage and the family. This is witnessed by the new phenomenon of equating homosexual unions with marriage and allowing same-sex couples to adopt children.

Metropolitan Hilarion drew the attention of the assembly participants to the fact that over the past few years same-sex cohabitation has been legalized in a number of states in the USA, a number of Latin American countries, New Zealand as well as France, England and Wales. “Those countries that have recognized in law homosexual unions as one of the forms of marriage are taking a serious step towards the destruction of the very concept of marriage and the family. The family in its Christian understanding is falling apart to be replaced by such impersonal terms as ‘parent number one’ and parent number two”, he stated.

The head of the DECR stressed that the response of the Christian Churches to the challenges of the modern world should be based on Divine Revelation as handed down to us in the Bible. “In speaking out against all forms of discrimination, the Church nonetheless must vindicate the traditional Christian understanding of marriage as between a man and a woman, the most important mission of which is the birth and upbringing of children”, His Eminence said, expressing the regret that not all Churches are ready today to vindicate the biblical ideals by going against that which is fashionable and prevalent secular outlook.

Metropolitan Hilarion also brought out another problem, which is the challenge of radicalism on religious grounds, in particular radical Islamism that poses a threat to the very existence of Christianity in the Middle East and in some countries of Asia and Africa. Christians are the most persecuted religious community in the world, while no measures have been taken to rectify the situation on the international level, he said stressing that to solve this problem all possible instruments, diplomatic, humanitarian, economic, etc., should be employed.

The head of the DECR expressed the conviction that it was necessary to develop interaction with traditional religions, especially Islam. He pointed to the work carried out by the World Council of Churches to help reduce the level of tension in Syria and avert an escalation of the conflict and prevent external military intervention.

In conclusion of his address, Metropolitan Hilarion thanked the Christian communities in South Korea for the hospitality and excellent organization of the forum. He assured the participants in the Assembly that the Russian Orthodox Church sympathized with the Korean people in their striving to find unity and supported the processes for overcoming tension in relations between the two countries of the Koran peninsula.

The critical reflection on liberal innovations introduced by some Protestant churches voiced by His Eminence Hilarion at the WCC General Assembly provoked a lively discussion at the plenary session, with most speakers supporting the point of view expressed by the head of the Russian Orthodox Church delegation.

A woman who represented one of the Protestant Churches in Africa thanked Metropolitan Hilarion for his remarks which, she believed, would help preserve national culture and traditional family values which appear to be destroyed so rapidly today.

Metropolitan Bishoy of the Coptic Orthodox Church, on his part, also supported the speech by the chairman of the Moscow patriarchate’s department for external church relations.

A representative of the Syrian Orthodox Church thanked Metropolitan Hilarion for having drawn attention to the catastrophic situation of Christians in Syria and the Middle East.