On February 11, 2013, the chairman of the Moscow Patriarchate’s department for external church relations, Metropolitan Hilarion of Volokolamsk, made comments to ITAR-TASS news agency concerning that coming reports about the retirement of the head of the Roman Catholic Church, Pope Benedict XVI.

Reports about the retirement of Pope Benedict XVI have proved to be unexpected even for his closest associates. Cardinal Sodano described it as ‘a thunder out of a clear sky’. Really, there have been no precedents of this kind in the modern history of the Roman Catholic Church. Pope John Paul II remained in office to the end despite his serious health problems.

Meanwhile, the office of the Roman Pontiff, just as that of any head of a Church, presupposes active work. It is not a ceremonial office. If one’s age and health prove to be an obstacle for effective work, the head of a Church may decide to retire. In recent years, the Catholic Church has come to face very serious challenges which require new incentives to come from the See of Rome. Perhaps, precisely this has made the pope to give way to a younger and more dynamic prelate to be elected by the conclave of cardinals. The Pope Benedict XVI’s decision to leave his office in the present situation may be seen as an act of personal courage and humbleness. 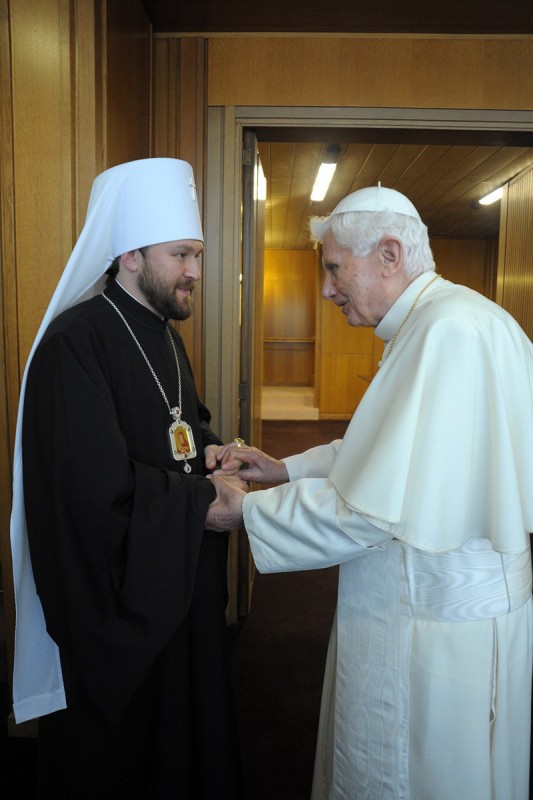 On 16 October 2012, Metropolitan Hilarion of Volokolamsk met with Pope Benedict XVI at the Vatican.

We are grateful to Pope Benedict XVI for his understanding of the problems which impede the full normalization of Orthodox-Catholic relations, especially in such regions as western Ukraine. Only yesterday I spoke about Pope Benedict XVI in my talk on Russia-24 TV network with the new Russian ambassador to the Holy See, A. A. Avdeyev. I pointed out that relations between the Russian Orthodox Church and the Roman Catholic Church have acquired positive dynamic after his ascension to the See of Rome. He enjoys great respect in the Christian world. He is a prominent theologian, who is well versed in the tradition of the Orthodox Church while having the sensitivity that makes it possible for him to build relations with Orthodox Church on due level.

My personal meetings and talks with Pope Benedict XVI remain memorable for me. There have been three meetings since I was appointed chairman of the DECR. In my talks with the pontiff I was always amazed by his calm and thoughtful reaction, his sensitivity to issues we raised, his desire to solve together the problems arising in our relations. Specifically, I set forth in detail to the pope my vision of the problems we have encountered in pan-Orthodox – Catholic dialogue (I made a report about these problems to the recent Bishops’ Council, and it made appropriate decisions). My attitude to the progress of this dialogue is very critical, which I frankly stated to the pope and he always showed understanding.

Even before his ascension to the See of Rome, Cardinal Ratzinger declared war on ‘the dictatorship of relativism’ so typical for the Western society today. It immediately made him unpopular in the eyes of secular politicians and journalists. Pope Benedict XVI is not a media star. He is a man of the Church. In the mass media, he is continuously criticized for traditionalism and conservatism, but precisely these merits of his are of credit for millions of Christians, both Catholic and non-Catholic, those who seek to preserve traditional Christian spiritual and moral values.

It remains only to hope that his successor will continue walking along the same path and that Orthodox-Catholic relations will continue developing progressively for the common good of the whole Christendom.