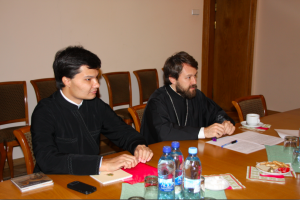 October 24, 2013 – Metropolitan Hilarion of Volokolamsk, head of the Moscow Patriarchate’s department for external church relations, met with the vice-chairman of the Cuban Council of Ministers, Mr. Ricardo Cabrisas. Present at the meeting were also Cuban Ambassador to Russia His Excellency Emilio Lozada Garcia and Miguel Palacio of the DECR secretariat for the far-abroad countries.

Metropolitan Hilarion warmly welcomed his guest, noting the traditionally high level of relations between Cuba and the Moscow Patriarchate. “The peoples of Russia and Cuba are tied by the bonds of old and strong friendship”, he said. Among the significant events in the Russian-Cuban relations, he said, was the opening of a church of Our Lady of Kazan in 2008 in Havana. The consecration of this church was led in October 2008 by Metropolitan Kirill of Smolensk and Kaliningrad (now His Holiness Patriarch of Moscow and All Russia). “Today the church of Our Lady of Kazan is also a spiritual and cultural center as the parish conducts various events allowing Cubans to get a better knowledge of Russia”, the metropolitan said.

Mr. Ricardo Cabrisas, on his part, thanked Metropolitan Hilarion for the meeting and conveyed best regards to His Holiness Patriarch Kirill. The vice-chairman of the Cuban government expressed the invariable willingness of the authorities of his country to develop cooperation with the Russian Orthodox Church.