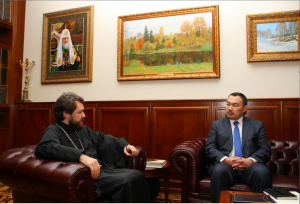 On 18 October 2013, Metropolitan Hilarion of Volokolamsk, chairman of the Moscow Patriarchate’s Department for External Church Relations (DECR), met with H. E. Bolot Junusov, Ambassador Extraordinary and Plenipotentiary of the Kyrgyz Republic to the Russian Federation.

They were joined in the meeting, which took place at the DECR premises, by Metropolitan Vikenty of Tashkent and Uzbekistan, head of the Central Asia metropolitan area; archpriest Sergy Zvonarev, DECR secretary for far abroad countries; and Mr. Kulikov, first secretary of the Embassy of the Kyrgyz Republic to the Russian Federation.

The DECR chairman greeted Ambassador Junusov and told him about aims and purposes of the Central Asia metropolitan area established by the decision of the Holy Synod taken on 27 July 2011. Ambassador Junusov noted the growing foreign activities of the Russian Orthodox Church, especially in defence of Christians in the Middle East. He informed Metropolitan Hilarion about the recent decision of the Kyrgyz authorities to re-register the Bishkek and Kyrgyzstan diocese.