Metropolitan Hilarion of Volokolamsk meets with German Ambassador to Russia 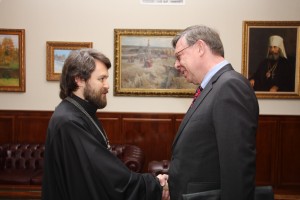 On 22 April 2013, Metropolitan Hilarion of Volokolamsk, chairman of the Moscow Patriarchate’s Department for External Church Relations (DECR), met with H. E. Ulrich Brandenburg, Ambassador Extraordinary and Plenipotentiary of the Federal Republic of Germany to the Russian Federation. They were joined in the meeting, which took place at the DECR premises, by archpriest Sergiy Zvonarev, secretary for far abroad countries; hierodeacon Roman (Kiselev), a staff member of the same secretariat; and Mr. Jens Beiküfner, counsellor and head of the Department of Culture of the German Embassy.

Metropolitan Hilarion warmly greeted the guests and told them about his upcoming visit to Germany timed to the celebration of the centenary of the Russian memorial church of St. Alexius in Leipzig and the Year of Russia in Germany and the Year of Germany in Russia.

Metropolitan Hilarion also told the guests about various aspects of the Russian Church’s ministry and foreign activities. In particular, he touched upon the present state of dialogue conducted by the Russian Orthodox Church with the Roman Catholic Church and with the Evangelical Church in Germany.

Metropolitan Hilarion shared information on the church-state relations, the place and role of the Church in the life of society, the teaching of the ‘Fundamentals of the Orthodox Culture’, the revival of the institute of military chaplaincy and social ministry of the Church.

Also discussed was the situation in Syria and other countries of the Middle East region. Metropolitan Hilarion underscored: ‘We worry about the destiny of Christianity in the Middle East. I hope that not only church leaders, but also state powers in the West will respond more actively to the facts of discrimination against Christians in the region.”

Ambassador Brandenburg thanked the DECR chairman for an interesting talk and wished him successful journey. He said he was confident that the upcoming visit will be conducive to the strengthening of Russian-German relations.