On 9 November 2013, Metropolitan Hilarion of Volokolamsk, chairman of the Moscow Patriarchate’s Department for External Church Relations (DECR), currently on a visit to Lebanon with the blessing of His Holiness Patriarch Kirill of Moscow and All Russia, visited the Monastery of the Dormition of the Theotokos in Balamand, where he was received by His Beatitude John X, Patriarch of the Great Antioch and All the East. 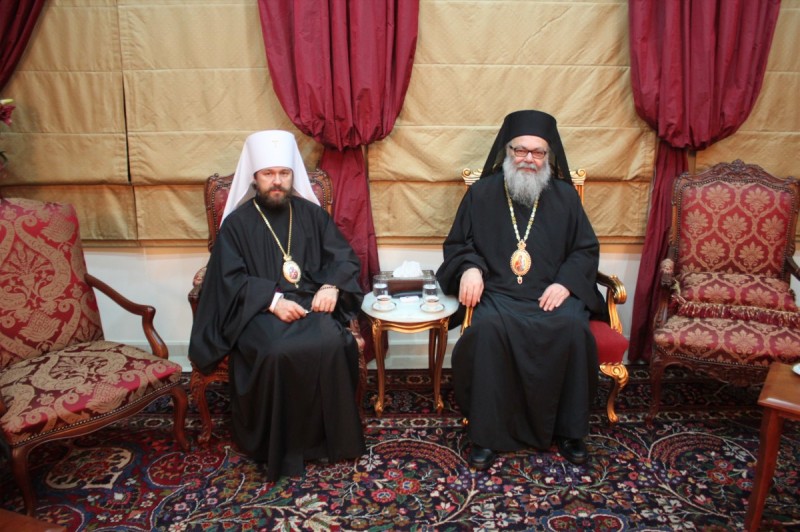 They were joined in the meeting by Archbishop Nifon of Philippopolis, representative of the Patriarch of Antioch in Moscow; Bishop Gattas of Kars, hegumen of the monastery; and archpriest Igor Yakimchuk, DECR secretary for inter-Orthodox relations.

Metropolitan Hilarion conveyed fraternal greetings from His Holiness Patriarch Kirill to the Primate of the Orthodox Church of Antioch.

His Beatitude John X remarked that the Patriarchate of Antioch and Moscow are linked by centuries-old bonds of love and brotherhood and expressed cordial gratitude to the Russian Orthodox Church and the Russian authorities for their strong stand on the defence of Christian in the Middle East and for the assistance they have rendered.

The DECR chairman expressed deep concern about tragic events in Syria and underscored that the Russian Orthodox Church will continue to do anything in her power to alleviate sufferings of the victims of military conflict in Syria. Metropolitan Hilarion also noted a positive example of Lebanon where much is being done for maintaining interreligious and inter-ethnic accord, while representatives of different religious and national communities work actively together for the prosperity of the country.