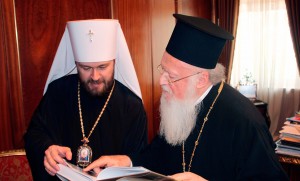 On 17 May 2013, Metropolitan Hilarion of Volokolamsk, chairman of the Moscow Patriarchate’s Department for External Church Relations (DECR), who was making a working trip to Istanbul with the blessing of His Holiness Patriarch Kirill of Moscow and All Russia, visited the Patriarchate of Constantinople. Metropolitan Hilarion venerated the relics of Ss Basil the Great, Gregory the Theologian and John Chrysostom at the Patriarchal Cathedral of St. George in the Phanar.

Soon after, the DECR chairman met with His Holiness Patriarch Bartholomew of Constantinople. They discussed many issues, including those of Orthodox cooperation in general and the development of bilateral relations between the Patriarchates of Constantinople and Moscow.

The hierarchs were joined in the meeting by archimandrite Bartholomew (Samaras), chief secretary of the Holy and Sacred Synod; archimandrite Bessarion (Komzias), great hierokiriks; and archpriest Igor Yakimchuk, DECR secretary for inter-Orthodox relations.

That same day, Metropolitan Hilarion and his suite departed for homeland. They were seen off at the airport by Mr. Alexei Yerkhov, Consul General of the Russian Federation in Istanbul.