On January 16, 2014, during his visit to Mexico, Metropolitan Hilarion of Volokolamsk, head of the Moscow Patriarchate’s department for external church relations, met with the head of the Mexican government, Mr. Miguel Angel Osorio Chong. 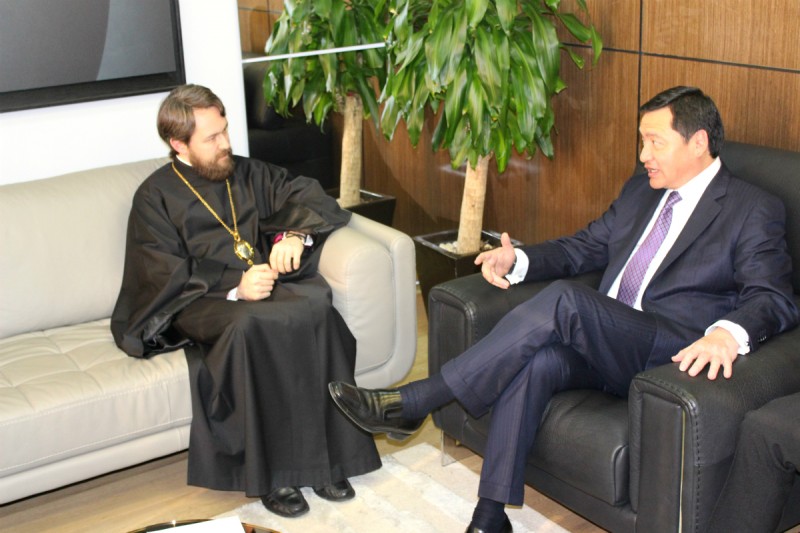 The prime minister warmly welcomed Metropolitan Hilarion, describing his visit as an event important for Russian-Mexican relations. He told His Eminence about the present status of Mexico City and major directions in the social and economic policy of his government, pointing to positive changes in a number of spheres of the country’s life. He underlined that comprehensive consolidation of relations with Russia was one of the priorities of the Mexico’s external policy today.

The DECR chairman, on his part, expressed satisfaction with his visit to Mexico undertaken at the invitation of Archbishop Anthony, Metropolitan of Mexico, Central America, Venezuela and the Caribbean Island (Patriarchate of Antioch). He told the prime minister about the external ministry of the Moscow Patriarchate and pastoral work carried out by the Russian Orthodox Church in Mexico.

Participating in the meeting were also Archbishop Anthony, Archbishop Justinian of Naro-Fominsk, administrator of the Patriarchal Parishes in the USA, Russian ambassador E. Malayan and Mr. M. Palacio of the DECR secretariat for the far-abroad countries.