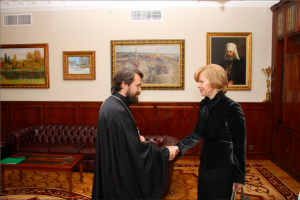 On 22 October 2013, Metropolitan Hilarion of Volokolamsk, chairman of the Moscow Patriarchate’s Department for External Church Relations (DECR), met with the newly appointed Ambassador Extraordinary and Plenipotentiary of the Republic of Latvia to the Russian Federation, H. E. Astra Kurme. They were joined in the meeting, which took place at the DECR premises, by archpriest Sergy Zvonarev, DECR secretary for far abroad countries, Miguel Palacio, a DECR staff member, and Mr. Klāvs Sniedze, counsellor of the Embassy of Latvia in Russia.

Metropolitan Hilarion greeted the guests and congratulated Ambassador Kurme with her new appointment. He expressed his hope for the development of cooperation between the Moscow Patriarchate and the Latvian diplomatic mission in Moscow and told her about the ministry of the Russian Orthodox Church in the countries in its canonical territory.

Discussed was the situation of the Russian-speaking people in Latvia. Metropolitan Hilarion hopes that the state would treat this part of the Latvian population with a greater understanding.

Metropolitan Hilarion shared with Ambassador Kurme the Russian Orthodox Church’s concern for the moral situation in European society. He said that the recognition of homosexual relationships as equal to married couples seriously threatens the institution of marriage.