Metropolitan Hilarion of Volokolamsk meets with Patriarch John of Antioch

On February 16, 2013, Metropolitan Hilarion and his party, who came to Lebanon for the enthronement of the new Primate of the Orthodox Church of Antioch, were received in audience by His Beatitude John X, Patriarch of the Great City of Antioch and All the East. 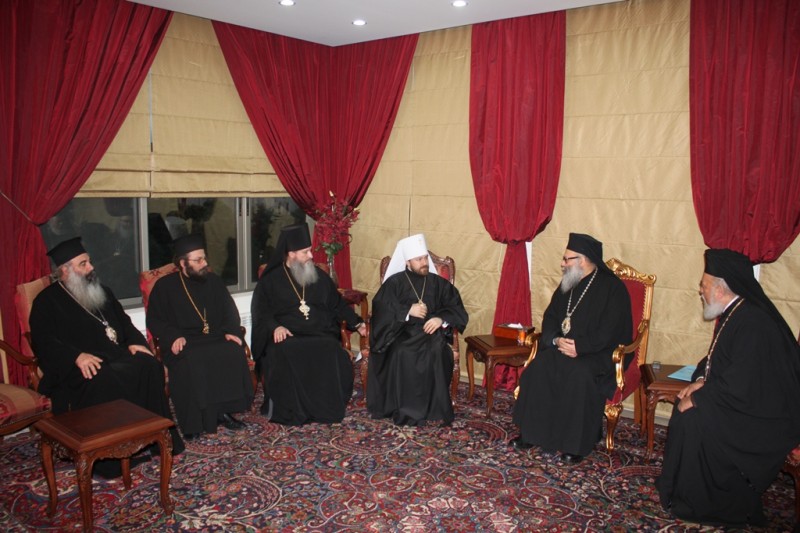 The DECR chairman conveyed to the new Primate of the Orthodox Church of Antioch fraternal congratulations and wishes of many years of peaceful primatial service from His Holiness Patriarch Kirill of Moscow and All Russia.

Welcoming the representatives of the Moscow Patriarchate, His Beatitude Patriarch John said that the history of fraternal contacts between the Orthodox Churches of Antioch and Russia had begun as far back as the time of the Baptism of Russia, recalling that it was St. Michael, a Syrian by origin, who became the first Metropolitan of Kiev and All Russia. His Beatitude confessed that he felt enormous responsibility for this flock, especially those who were persecuted in Syria today as a result of aggravation in the internecine conflict in the country. According to the Patriarch, tens of thousands of Christians, trying to escape from the violence, had to flee their country. On behalf of the Church of Antioch, he expressed warm gratitude to Russia and the Russian Orthodox Church for their support in this painful situation.

‘The Council’s action to elevate the See of Moscow to the patriarchal dignity was signed, among others, by the Patriarch of Antioch’, Metropolitan Hilarion said. ‘We always remember it and we are grateful to our elder sister, the Orthodox Church of Antioch. But we feel special heartfelt closeness to Antiochian Christians at the present hard times of trial they are going through now’. The DECR chairman assured Patriarch John of the Russian Orthodox Church’s readiness to continue giving prayerful, moral and other help to persecuted Christians in the Middle East.

The talk highlighted the mutual desire to develop fraternal relations between the Patriarchates of Antioch and Moscow in various areas and also concerned topical issues of pan-Orthodox nature.