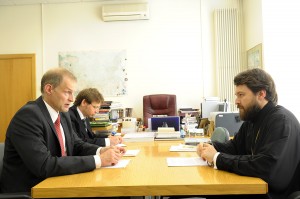 On 25 June 2013, Metropolitan Hilarion of Volokolamsk, chairman of the Moscow Patriarchate’s Department for External Church Relations (DECR), met with H. E. Wojciech Zajączkowski, Ambassador Extraordinary and Plenipotentiary of the Republic of Poland to the Russian Federation.

Discussed at the meeting, which took place at the Rudomino All-Russia State Library for Foreign Literature, were plans for a next autumn Russian-Polish conference as a follow-up of the Joint Message to the Peoples of Russia and Poland by His Holiness Patriarch Kirill of Moscow and All Russia and Archbishop Jósef Michalik, President of the Polish Episcopal Conference.