On 16 October 2012, Metropolitan Hilarion of Volokolamsk, chairman of the Moscow Patriarchate’s Department for External Church Relations, met with Pope Benedict XVI at the Vatican after the session of the Synod of Bishops of the Roman Catholic Church, at which the DECR chairman delivered greetings. 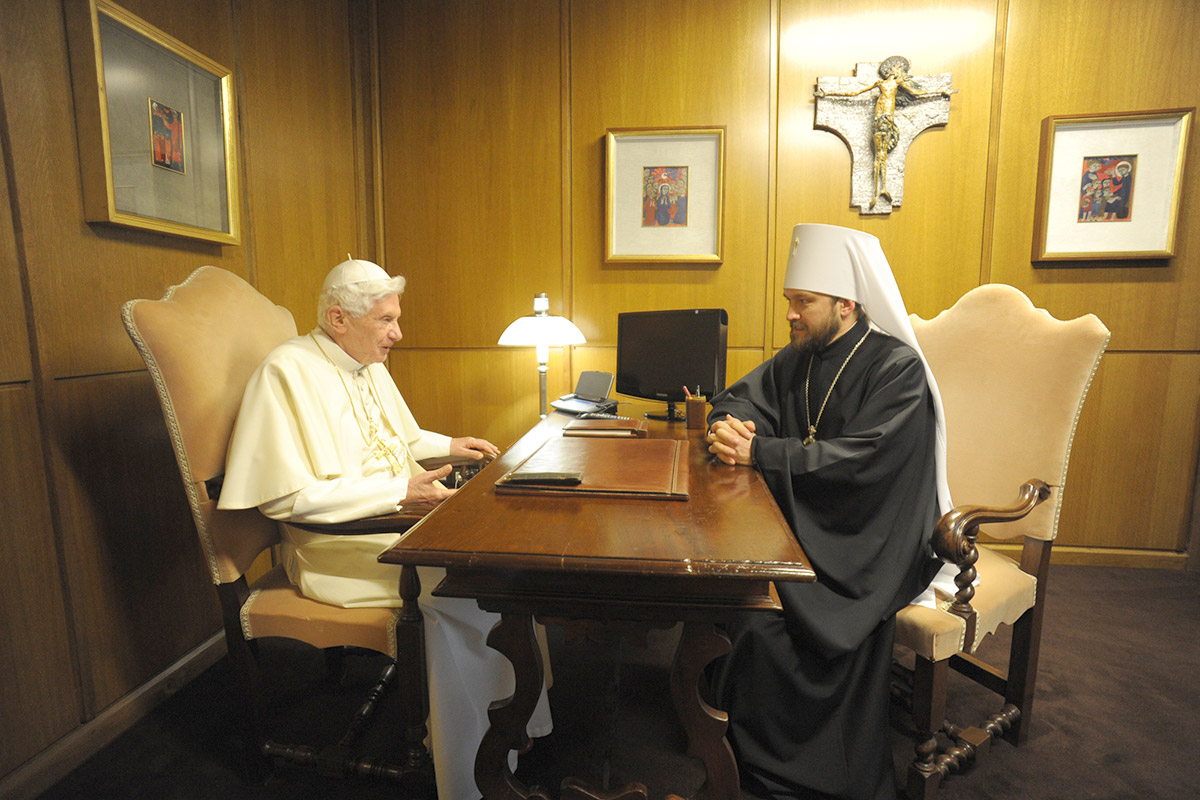 Metropolitan Hilarion conveyed best wishes to Pope Benedict XVI from His Holiness Patriarch Kirill of Moscow and All Russia. The Pope wished the Primate of the Russian Orthodox Church God’s help and success.

A wide range of issues was touched upon in the talk Metropolitan Hilarion answered question of the head of the Roman Catholic Church, telling him about the present situation of the Russian Orthodox Church, the election of bishops and establishment of new metropolias, about theological schools and monasteries, the extension of missionary and educational activities of the Church, the teaching of the fundamentals of religious culture and secular ethics in schools, and about the opening of the chairs of theology in secular educational institutions.

Metropolitan Hilarion also told Pope Benedict XVI about the work of the Moscow Patriarchate’s Synodal Biblical and Theological Commission he heads and about his meeting with the newly appointed prefect of the Congregation for the Doctrine of the Faith, Archbishop Gerhard Ludwig Müller, which took place earlier the same day. The DECR chairman expressed his hope for the development of relations between the Russian Orthodox Church and the Roman Catholic Church in theological research.

Also discussed was the desecration of Christian holy sites in different countries and the act of vandalism at the Cathedral of Christ the Saviour in particular. Pope Benedict XVI expressed solidarity with the position of the Russian Orthodox Church and also his bewilderment over the reaction of the certain mass media to the events.

The persecution of Christians in different parts of the world was an important theme of the talk. Metropolitan Hilarion underscored that the protection of Christian heritage in the Middle East and other countries where Christians are discriminated and persecuted is a common task of the Orthodox and the Catholics.

Metropolitan Hilarion presented Pope Benedict XVI an icon “The Descent into Hell” painted by protodeacon Alexiy Trunin and introduced his suite consisting of hieromonk Antoniy (Sevryuk), secretary of the Administration of the Moscow Patriarchate’s parishes in Italy, and deacon Alexiy Dikarev, a staff member of the DECR secretariat for inter-Christian relations.