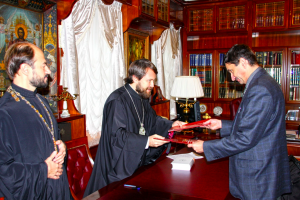 Metropolitan Hilarion highly appreciated scholarly, educational and publishing activities of the Academy and noted its importance as an authoritative place for academic, interconfessional and civic dialogue. He also noted with satisfaction the successful development of cooperation between his Institute and the Academy carried on the basis of an agreement signed in June 2010.

The rector signed an additional agreement on cooperation that regulates new forms of common educational and scholarly programms.