Metropolitan Hilarion of Volokolamsk: the Holy Rus’ keeps living in the souls of millions of people who are under spiritual guidance of Russian Church 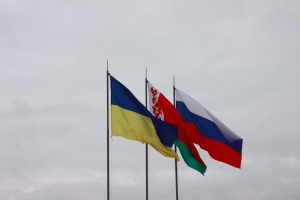 A solemn divine service was celebrated at the crossing place of Russian, Ukrainian and Byelorussian borders on 29 June 2013, preceding the traditional International Festival of Slavic Nations.

After the liturgy, clergy and official delegations took part in the opening of the festival marking the 1025th anniversary of the Baptism of Russia.

Flags were hoisted and the national anthems of Ukraine, Byelorussia and Russia were performed. Mr. Yury Bogutsky, advisor to the President of Ukraine and head of the Presidential Administration Chief Office for Humanitarian Development, read out a message from Mr. Viktor Yanukovych. Greeting the participants in the festival were also Mr. Alexander Beglov, Envoy of the President of the Russian Federation to the Central Federal District; Mr. Vladimir Khomenko, head of the Chernigov Regional Administration; Mr. Vladimir Dvornik, head of the Gomel Regional Executive Committee; Mr. Nikolai Denin, Governor of the Bryansk region; Mr. Anatoliy Lis, advisor to the President of the Republic of Belarus and chief inspector for the Gomel region.

Metropolitan Hilarion of Volokolamsk greeted all those present on behalf of His Holiness Patriarch Kirill of Moscow and All Russia and noted that the 1025th anniversary of the Baptism of Russia gave a great opportunity to remember the heroic deed of the Holy Prince Vladimir the Baptizer of Russia. Thanks to Prince Vladimir’s momentous choice, Russian, Ukrainian and Byelorussian people regard each other not as foreigners, but as brothers, kin sharing the same worldview.

“Belonging to the one Eastern Slavic Orthodox civilization, each of our nations has its own national identity, as is vividly demonstrated by the ‘Friendship’ festival which unites young people from Ukraine, Russia and Byelorussia”, Metropolitan Hilarion said. “In recent years, common prayer has become part of the festival. And today we for the first time have celebrated the Divine Liturgy here, having partaken of the Holy Communion from the same chalice. Soon a church will be built in this place, at the crossing point of three roads and three borders, which will become a symbol of our spiritual unity.”

“The Holy Rus’ is not a phenomenon of our distant past. The Holy Rus’ keeps living in the souls of millions of people who are under the spiritual guidance of the Russian Church. Though state borders separate us today, we have a common history and the one Church. It means we have a common future.”

The official part of the festival was followed by a concert program.

Representatives of the Russian Orthodox Church saw the expositions arranged by youth organizations of the Gomel, Chernigov and Bryansk regions.

After the festival, the Ukrainian delegation gave a grand reception.