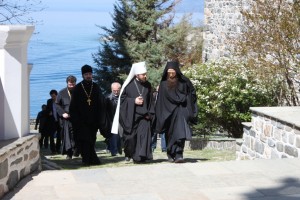 On 13 April 2013, Metropolitan Hilarion of Volokolamsk, chairman of the Moscow Patriarchate’s Department for External Church Relations (DECR) arrived in the Holy Mountain of Athos as head of a group of pilgrims, which consists of hegumen Philaret (Bulekov), DECR vice-chairman; archpriest Igor Yakimchuk, DECR secretary for inter-Orthodox relations; hieromonk Antoniy (Sevryuk), secretary of the Moscow Patriarchate’s parishes in Italy; hierodeacon Ioann (Kopeikin), assistant to the DECR chairman; and four laymen, including Anatoly Churiakov, a DECR staff member.

The pilgrimage began at the New Thebaid abode in the jurisdiction of the Russian Monastery of St. Panteleimon. Once upon a time, some four hundred Russian monks lived in the Thebaid. Because of dramatic events in the 20th century the abode has become desolated, but is being restored at present. The pilgrims venerated the holy sites, including an icon of St. Isaac the Syrian with a particle of is precious relics; surveyed churches and buildings under restoration.

That same day, the pilgrims visited a scete of the Monastery of St. Panteleimon the Old Roussikon, which is undergoing restoration.

Upon returning to the monastery, the pilgrims prayed at the All-Night Vigil; Metropolitan Hilarion officiates at Polyelaios.

On April 14, the 4th Sunday in Lent, Metropolitan Hilarion celebrated the Divine Liturgy together with Bishop Varsonofiy of Borodyansk, a vicar of the Kievan Metropolia; hegumen Jeremiah and ordained pilgrims.

After Metropolitan Hilarion’s exhortation and a short rest, the group departed for the Iveron Monastery.