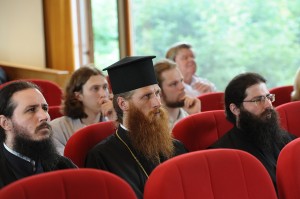 Metropolitan Hilarion of Volokolamsk, chairman of the Moscow Patriarchate’s Department for External Church Relations, chairman of the Synodal Biblical and Theological Commission and rector of the Ss Cyril and Methodius Theological Institute of Post-Graduate and Doctoral Studies delivered a report on the ‘Education labours of Ss Cyril and Methodius as a living church tradition’ at the opening session.