On 13 December 2012, the State Kremlin Palace hosted the 20th Award Ceremony for the St. Andrew the First-Called International Prize for Faith and Faithfulness.

Mr. Vladimir Yakunin, chairman of the St. Andrew Foundation’s Board of Trustees, read out greetings of the Russian President Vladimir Putin to the prize-winners and all participants in the ceremony.

Metropolitan Hilarion of Volokolamsk, chairman of the Department for External Church Relations, read out greetings from His Holiness Patriarch Kirill of Moscow and All Russia to the organizers, participants and guests.

His Holiness hopes that the Fatherland will be rich with selfless workers and courageous people with faithful hearts.

Archpriest Valerian Krechetov, rector of the Church of the Protecting Veil of the Mother of God in the village of Akulovo, Moscow region, is one of the nine prize-winners for 2012. 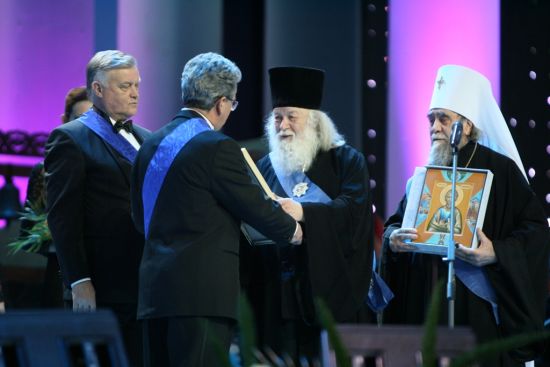 There prizes were presented by Mr. Yakunin, Metropolitan Vladimir of Omsk and Tara, and head of the Prize Committee Oleg Atkov, pilot-astronaut, Hero of the Soviet Union.

Among those attending the ceremony were Archbishop Nifon of Philippopolis, head of the Moscow Representation of the Orthodox Church of Antioch; Bishop Anthony of Moravici, representative of the Patriarch of Serbia to the Patriarch of Moscow and All Russia; President Yunus-bek Yevkurov of Ingushetia; and Mr. Sergei Popov, first deputy chairman of the State Duma Committee for Public Associations and Religious Organizations.