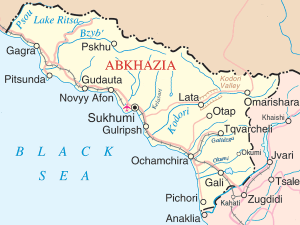 On 28 March 2013, a meeting on the problems of Orthodoxy in Abkhazia took place in Sochi, taking part in which on behalf of the Russian Orthodox Church were Metropolitan Hilaron of Volokolamsk, chairman of the Moscow Patriarchate’s Department for External Church Relations, and his deputy, archpriest Nikolai Balashov.

The participants exchanged opinions on the present situation of Orthodoxy in Abkhazia and prospects of development and shared their vision of the problems and their solution.

President Alexander Ankvab of Abkhazia underscored that spiritual ties of the Abkhazian clergy and Orthodox people of Abkhazia with the Georgian Orthodox Church had been lost long ago and could not be re-established.

Metropolitan Hilarion expressed his conviction that the problem could be solved only on the basis of strict adherence to church canons.

The participants agreed on the expedience of consultations on this problem and meetings in various forms in the future.