Metropolitan Hilarion: the unique role of the Russian Orthodox Church is that it unites the peoples of the post-Soviet space

On October 19, 2013, Metropolitan Hilarion as the host of the Church and the World talk show on Vesti-24 TV channel had as his guest Fedor Lukyanov, journalist and political scientist, chairman of the Council for Foreign and Defence Policy. Below is the abridged text of their talk. 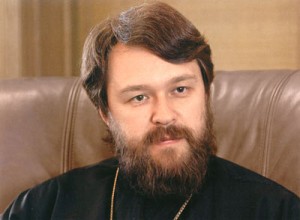 F.L. We are meeting at a very interesting moment. Not so long ago there was the Valdai Forum which attracted truly universal attention throughout the world. The theme of the Forum was Russia’s Identity in the Rapidly Changing World, which is of primary importance both for our country and the whole world. You were a guest of the Forum and made a very interesting speech. Can you tell us about your expression? Did you feel anything new in that atmosphere?

M.H. First, it seemed to me that the whole atmosphere of the Forum was very much in harmony with the spirit of our time. It was an atmosphere of frank discussion between people concerned, between those who sometimes find themselves at the opposite ends of the pubic spectre expressing polar points of view while being able to speak with each other. It suggests that we have made a certain progress, at least in the area of conducting debates.

Certainly, I was very much impressed by the President’s speech. I should say that I don’t remember of any programmatic speech made in recent time that would give so much attention to things we as church people hold dear, to spiritual and moral values. We often hear from state leaders statements about the economic or financial policy, but when, after a long interval, we heard something about moral and spiritual values, about the importance of inter-confessional dialogue, about the importance of the Russian Orthodox Church and the role of the clergy in people’s life and special calling of Russia as guardian of these values, I took it as the most important of all that was said at the forum. I think it will play an important role in policy both in Russia and on the international arena.

F.L. I agree, it was an extraordinary speech. I as a person involved in international relations noticed the statement in the speech that competition in the new changing world will become more acute, but along with traditional spheres, such as military and political, it moves to another plane. In the first place, it is the problem of moral values. Secondly, the president emphasized that there will be the struggle for man, for ensuring conditions for his development. It will become a guarantee for the development of the state.

M. H. The fact that the state is increasingly turning to the real man can be considered a very important and very positive shift in our social development. But the real man is not a mere economic or financial element. The life of the real man is based on particular spiritual and moral values.

It is interesting that the President spoke on the theme that we often discuss speaking about the processes taking place in the West. Indeed, a systemic destruction of family values is happening there today. It is done under the banner of liberalization, the emancipation of people, the democratization of society. They actually say that the family as a certain necessary component of human being does not exist. The family is believed to be a community of people which can develop randomly, because of personal inclination of a particular individual. In this sense, the family may not consist of father, mother and children. It may be Parent No.1 and Parent No. 2 of the same sex. And these unnatural unions must have the same rights as the traditional marriage, which is recognized by all the traditional religions without exception. The President said that in the West today, religion is altogether passed over in silence; they seek to drive it to a ghetto. Even such feasts as Christmas and Easter are given other names allegedly to avoid bringing enmity in the inter-confessional society. The President said Russia will not take this path. It is a very important statement.

F.L. Among the speakers at the Valdai Forum there were many representatives of Islam who focused of course on interreligious relations. I have an impression that, despite the right words they said, despite the strong traditions of co-existence existing in Russia, still there is a certain tension between representatives of religions. Did you see such things?

M.H. In our contacts with Russian religious leaders, be they Muslims or Buddhists, we feel a very high level of mutual understanding and awareness that we have common problems. For instance, the problem of terrorism. At the Forum, both the Orthodox and Muslims spoke of it as a common challenge. I, for instance, spoke about the killing of Muslim leaders and theologians, which has become systemic. For the last 20 years, over 50 muftis and leading Islamic theologians were killed in the Caucasus. In the recent time, this wave of murders has reached previously very peaceful Tatarstan. We witness how Wahhabites and terrorists have dealt shortly with their ideological opponents, the people who call to tolerance and mutual respect and who insist that Russia’s unique experience as a multi-confessional state should be preserved through the effort of people of various confessions. I was very glad to hear that the voices of traditional confessions sounded in unison at the Forum.

And the speech of the President made me glad as it sounded in unison with the voice of religious leaders. For me, it became a kind of sign showing that the symphony mentioned by the Patriarch immediately after his election to the patriarchal see, the cooperation between the state and religious confessions without mutual interference in each other’s affairs acquired a real shape.

F.L. Your Eminence, does the Russian Orthodox Church encounter the same problem as you have described with regard to Muslims? Are there people of excessively radical views appearing in your Church, either too conservative or the opposite?

M.H. We do have people with excessively radical views. We have fanatics. We have people who, claiming to be Orthodox Christians, are against the church authority and criticize it, some for the so-called ecumenism, others for something else. We know these people. Some of them are rather loud. Thank God, it has never led to physical violence, and we can say that there is no problem of Orthodox terrorism.

F.L. The President clearly stated that nationalism of any kind in Russia is the greatest threat. With the moods we see in our society, especially in large cities, with regard to the problem of migration, these words sound as if contrary to the public opinion. Can it happen so that for purely domestic reasons there will be a shift in people’s consciousness towards intolerance? For all the traditions of peaceful co-existence.

M.H. Regrettably, it has already become a reality. The degree of intolerance is growing in our society. It is a very alarming tendency which needs attention from both the state and religious confessions. Here we are called to work hand by hand with our Muslim, Jewish, Buddhists brothers – people of all the traditional confessions. We educate our flock in the spirit of patriotism, that is, love of the Motherland. But patriotism should never degenerate into nationalism, that is, the idea of other nations as inferior. Of course, we have the titular ethnic group; we have certain rights of the Russian people, which used to be ignored, especially in the Soviet time. In the Soviet time generally, there was no such a notion as “the Russian people”. Nowadays this notion does exist, but what content do we put into it? Isn’t our patriotism turning into nationalism? We should always ask this of ourselves. I think, all the religious leaders in our Motherland are aware of the explosion hazard of this theme and of the responsibility placed on each of us

F.L. In your speech, you said that the Russian Orthodox Church was not the Church of Russia. It goes beyond the border of one state. In this connection, there has arisen certain misunderstanding in the neighbouring countries. It is stronger when politicians begin abusing this theme. Is the Russian Orthodox Church a bearer of some ideas consonant to precisely those of the Russian State, or it is equally the Church of the countries in which it is present?

M.H. Of course, some ideas of the Church can be consonant with those of the Russian State. But many church ideas are consonant with those of other state leaders. The Russian Orthodox Church is not the Church of Russia. When the Patriarch goes to Ukraine or Belarus or Moldova or other countries in the post-Soviet space, he does not go abroad but home, to his flock. I was asked what role the Patriarch plays when he comes to the countries of the post-Soviet space. Doesn’t he voice the ideas of the Russian leaders? The Patriarch voices the ideas which stem from his role as head of the multi-national Russian Orthodox Church in which no preference is given to either Russian or Ukrainian or Moldovan or Kazakh, in which all are equal and each nation has the same right to self-expression. Our Church is multi-national and in this sense it is unique. It has a completely special character and special mission. It unites not only the multi-ethnic Russian people but also peoples of the post-Soviet space. And His Holiness the Patriarch gives special attention to this unique role of our Church.