Metropolitan on rally controversy: I could not do otherwise 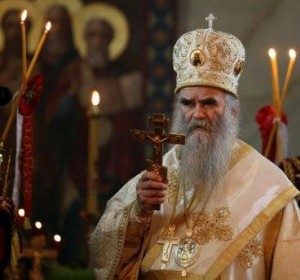 SPC Metropolitan Amfilohije has commented on his address during a recent rally in Belgrade, to say that he “could not have done otherwise.”

The rally was held by the Kosovo Serbs opposed to the Brussels agreement. The Serbian Orthodox Church dignitary addressed it to, among other things, say a prayer for the repose of the country’s parliament and government.

“The things that are happening, this agreement – it is not an agreement, it is a dictate, violence… Kosovo and Metohija, it is the Church, it is my cry,” the metropolitan said in an appearance on Radio Television of the Serb Republic (RTRS) on Thursday night.

The Serb people are on the Balkan crossroads, constantly at the focus of historic events, not only those concerning the Balkans but the rest of the world as well, he stated, and added: “This has been especially prominent since the Battle of Kosovo, until today.”

Amfilohije, who is the highest ranking SPC dignitary in Montenegro as head of the Church’s Metropolitanate of Montenegro and Lateral, said that he first commented on the issue of Kosovo and Metohija in 2008, when the Montenegrin administration recognized Kosovo.

But he dismissed accusations that his latest statements meant he was meddling in politics, stressing that “the Church is the primeval soul of the people who did not give anyone, including those in power, the right to renounce on their behalf everything that Kosovo represents.”

The metropolitan’s words spoken at the rally met with widespread condemnation from parties and officials, while SPC Patriarch Irinej distances himself from the controversy.

Speaking for the Montenegrin state television on Friday, Amfilohije said that the patriarch “reacted hastily when he distanced himself,” and added:

“I told Patriarch Irinej that, had he had a chance to see and hear what Bishop Atanasije and I were saying – which he did not at the time – he would have realized that we said nothing that he himself did not say on many occasions.”

During his appearance on RTRS – the public broadcaster of the Serb entity in Bosnia – the metropolitan also touched on the issue of Srebrenica, saying that it was a “misfortune”, but that the treatment afforded to it meant that “new massacres are being prepared,” and mentioned WW2 crimes committed against Serbs in Bosnia by the Muslim Hadžar Division, and the Croatian Ustasha fascists.

“The question of Srebrenica is indeed a great wound. If Tomislav Nikolić says he is already kneeling in front of Srebrenica – what shall we do about Bratunac, about the several thousand (Serbs) killed before that… Now all of a sudden, you are taking over what they created, the Srebrenica myth. Well this Srebrenica has now become something bigger that Dachau and Auschwitz. By pushing this misfortune, which it was, new massacres and new hatreds are actually being prepared for the future,” he was quoted as saying.

He then referred to the crimes committed against Bosniaks and Croats during the wars of the 1990s as a misfortune and “a mutual consequence of the evil and misfortunes of the Second World War.”

Speaking about Serbia’s efforts to join the EU, the metropolitan said the country “cannot disintegrate its own being in order to enter the mirage of the EU,” as this policy was “no realpolitik”, and added:

“The poor EU itself is falling apart. Hope to God that it is preserved.”

Amfilohije also stated that President Nikić should work with everyone – “only, guarding the honor of his people, guarding the Constitution, what has been confirmed in the United Nations.”