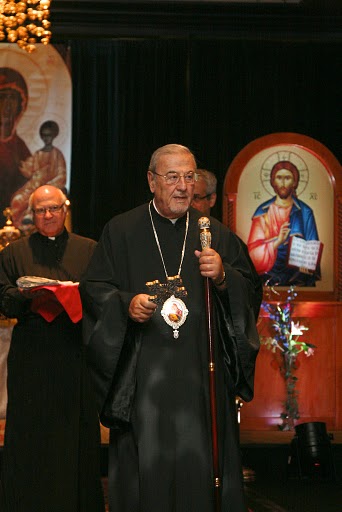 Metropolitan Philip Saliba, who in nearly 50 years as leader of the Antiochian Orthodox Christian Church in North America fostered a growth in membership and parishes while encouraging unity among Orthodox churches, died in Fort Lauderdale, Fla., of heart failure. He was 82.

He was in Florida for the winter and was receiving medical care there. He died Wednesday.

“His passing will leave a void in the Orthodox Christian community,” said Ron Royhab, a former president of the council at St. Elias Antiochian Orthodox Church in Sylvania and a retired executive editor of The Blade.

“He was a leading figure of the entire Orthodox world for the latter half of the 20th century and into this century as well,” said the Rev. Michael Ellias, a former pastor of St. Elias. “He really had a vision of what he wanted to accomplish in his episcopacy and with his place in the church.”

During Metropolitan Philip’s tenure, unity became a central message. When he was chosen in 1966 to succeed the late Metropolitan Antony Bashir, there were two archdioceses of Antiochian Orthodoxy not in communion with each other, Father Michael said.

“He took the initiative to heal that rift and brought unity where there had been division,” Father Michael said. The two archdioceses were joined together in 1975.

In 2002, church leaders in Damascus agreed to the autonomy of the North American Archdiocese under Metropolitan Philip. He was in Toledo the next year to celebrate the 90th anniversary of St. George and spoke of his next goal — unity among Orthodox churches in the United States.

“As long as we are fragmented and known by Antiochians and Greeks and Serbians and Bulgarians and Russians, we will have no impact as a church on this country,” Metropolitan Philip told The Blade in 2003.

Richard G. Joseph, a longtime parishioner of St. Elias and a friend, said: “He felt that way to the day he died, that we should be one.

“His eminence was a remarkable gentleman — his ability to be with people, to communicate effectively in English and Arabic,” Mr. Joseph said. “His very being created warmth. When he walked in the room, you knew without his being seen that someone special was in the room.”

Mr. Royhab noted that Metropolitan Philip built a church of immigrants into a church “that has attracted converts into the clergy as well as parishes across the country.”

“He was a visionary in the church and has built the archdiocese in America from some 50 churches into several hundred churches today,” Mr. Royhab said.

Metropolitan Philip, as first vice chairman of the Assembly of Canonical Orthodox Bishops of North and Central America, “passionately supported a common witness to our Orthodox faith in the world,” Archbishop Demetrios, of the Greek Orthodox Archdiocese of America and chairman of that canonical assembly, said in a statement.

“The very characteristic of Metropolitan Philip was his identity as a shepherd, a father who cared for and labored diligently for his flock,” Archbishop Demetrios said in the statement.

The Very Rev. Thomas Begley recalled the metropolitan as a warm and understanding man who was also a good church organizer.

“He was truly a man who had vision,” said Father Thomas, who is dean of the Upper Midwest Deanery of the Diocese of Toledo of the Antiochian Orthodox Archdiocese. He is based in West St. Paul, Minn.

The metropolitan was able to inspire people — even for projects that sometimes seemed unlikely.

Decades ago, for instance, the metropolitan started a church camp, Antiochian Village, in what seemed like a middle-of-nowhere spot in western Pennsylvania’s borough of Bolivar. Many wondered who would ever go there, Father Thomas said.

But the camp flourished, a tribute to the metropolitan’s ability to find donors, send campers, and pick an able director, Father Thomas said.

Father Ayman Kfouf, pastor at St. Elias Church, was introduced to the metropolitan about 20 years ago as a student in Lebanon, the metropolitan’s home country. He was impressed the metropolitan was raising $100,000 for the school there but still took time to talk to students.

And his conversations with students, be they in Lebanon or in the states, were not just in passing. The metropolitan had an amazing memory for names, relationships, and events, even as he was working on a national and international level, Father Ayman said.

“He was a real shepherd who we will miss forever,” Father Ayman said.

He was an outspoken advocate for Arab Christians — including Palestinian refugees and those displaced by Lebanon’s and Syria’s civil wars. Yet he always insisted that his church adapt to American ways and welcome converts with no ethnic connection to the Middle Eastern roots of the church.

He was the longest-serving bishop in any branch of Orthodoxy in the United States — having been in his role for nearly half a century since the age of 35.

He insisted the archdiocese modernize operations, create a clergy retirement program, a women’s organization and parishes and monasteries. Following his predecessor’s lead, he fostered the use of English rather than Arabic in liturgies.

“His favorite song used to be ‘The Impossible Dream,’ ” Kweilin Nassar of Pittsburgh recalled of his early goals — but he made many of them realities.

Ms. Nassar said Metropolitan Philip was open to change. After she questioned why no women were on the archdiocese’s board, he began appointing some at the next convention. “And then looked at me from the podium and said, ‘Is that better, Kweilin?’ He was responsive when there were things that made sense and he knew it would be better.”

Metropolitan Philip oversaw a quadrupling of parishes in the diocese to about 275.

Orthodoxy — the second-largest global branch of Christianity with roots in and around the Middle East and Europe — represents a small but historically rich presence in America. It is steeped in intricate liturgy, sacraments and a sense of spiritual unity with the saints whose images abound on the icons and walls of incense-filled churches.

Ordained a deacon in 1949, Metropolitan Philip worked in church administration and lecturing before continuing studies in Great Britain and the United States. He was ordained a priest in 1959. He served at parishes in Detroit and Cleveland, began serving on various church boards and was chosen in 1966 to succeed the late Metropolitan Antony.

He attended Wayne State University in Detroit — which in 1986 awarded him an honorary doctorate — and was president of the Arab Student Federation there.

Surviving are his brothers Nassif and Najib Saliba.

Memorial liturgies will be held this week at the Cathedral of Saint Nicholas in Brooklyn. Metropolitan Philip’s body is then scheduled to be transported to Antiochian Village on March 30, followed by a vigil and burial rites on March 31.

Most viewed articles
Blasphemous and Obsessive Thoughts Come Into My Mind. What Do I Do?156
An Extraordinary Session of the ROCOR Synod of Bishops Convenes113
Funeral Services for His Eminence Metropolitan Hilarion of Eastern America and New York81
Is God a Fool?74
How to Respond to Opposition to the Gospel64
Metropolitan Joseph, Bishop Thomas Celebrate Centennial of Little Falls Parish55
A Piece of Rock Falls Down on the Skete of St. Anna on Mt. Athos48
PRAY: 14 Students, One Teacher Dead After Texas Elementary School Shooting42
His Beatitude Metropolitan Tikhon Issues Statement on Tragic School Shooting in Texas33
Most popular authors
Pravmir.com team242
Fr. Eugene Murzin156
Archpriest Stephen Freeman74
Archpriest Basil Ross Aden64
Subdn. Peter Samore55
Associated Press42
Metropolitan Tikhon of All America and Canada33