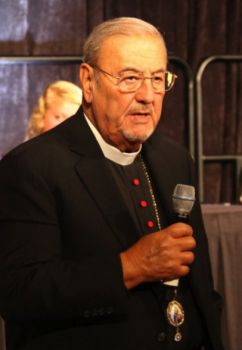 Greetings and best wishes to you and to your two precious daughters in the spirit of this Holy Christmas season. I was honored to receive your invitation to attend a White House holiday reception on Friday, December 6th, 2013.

I remember fondly my attendance at the White House reception two years ago. The photograph which we took together on that auspicious occasion continues to adorn my office. Unfortunately Mr. President, I did not attend your holiday reception this year because while I do have the joy of Christmas, I do not have the peace of Christmas. This is the peace which the angels proclaimed on that Holy Night “Glory to God in the highest and on earth peace, goodwill toward men” (Luke 2:14). Although I am Lebanese by birth and a proud American citizen for the past fifty-seven years, I received my secondary education in the cities of Homs and Damascus, Syria.

Mr. President I do not have the peace of Christmas because there is no peace either in Lebanon or in Syria. During the time which I spent in Syria as a student and secretary to the late Patriarch Alexandros Tahan, I ate the bread of Syria, I drank the water of Syria, I breathed the air of Syria and I enjoyed the most generous hospitality of the Syrian people.

No Mr. President, I do not have the peace of Christmas while two of my brother archbishops Boulos Yazigi and Youhanna Ibrahim are still in captivity in northern Syria with no news since their abduction. Actually Mr. President, we do not know whether they are alive or dead. Two weeks ago, Mr. President, twelve of our Orthodox nuns were abducted from the convent of St. Thekla of Maaloula, Syria. These nuns are innocent women who care for some orphans in the convent. These peaceful women do not have arms and do not fight but pray for peace every day and night. I contacted the State Department and spoke to Ambassador Ford who promised me that he is doing everything possible to gain the release of the two abducted Archbishops and the nuns, but to no avail.

Recently a video appeared on Al-Jazeera network which reportedly showed the nuns and the Abbess of the convent, Mother Pelagia in captivity, and she said that they were living in a villa. What a mockery! If the abductors wanted the nuns to escape the bombardment of Maaloula, they could have sent them to the Orthodox Patriarchate in Damascus, which can accommodate one hundred nuns. We know the truth Mr. President. The truth is that the video was made under extreme psychological pressure, which these nuns are enduring every day. There is every reason to fear for their safety.

Finally Mr. President, anything that you can do as the leader of the free world to stop the bloodshed and destruction in Syria will be very deeply appreciated. May the peace of Christmas which this broken world does not understand dwell in your hearts and in the hearts of your family forever.

Can God Break A Promise?

Most viewed articles
Receiving Christ and satan234
Patriarch Kirill Sends His Condolences to Queen Elizabeth II over the Death of Her Husband135
Don’t Miss The Ladder123
Can God Break A Promise?64
Patriarch Kirill: Faith in the Lord Gives Us the Ability to Distinguish Between Good and Evil53
Metropolitan Hilarion: Faith is the Foundation of the Religious Life48
First Orthodox Prayer Book in Portuguese Published in Portugal44
The Transfiguration of Our Lord and Savior Jesus Christ2
Participating in God’s Vision1
devy-france-121
Most popular authors
Archpriest Michael Gillis234
Pravmir.com team234
Archpriest Geoffrey Korz123
Fr. James Guirguis64
Metropolitan Hilarion (Alfeyev)48
Priest Dustin Lyon1