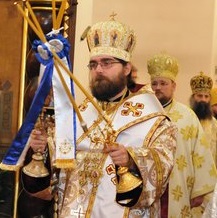 In response to a letter from the Orthodox Church in the Czech Lands and Slovakia, dated January 13, 2014, His Beatitude, Metropolitan Tikhon, sent a congratulatory message to Sister Church’s newly elected Primate, Metropolitan-elect Rastislav, Archbishop of Presov and Slovakia.

Metropolitan-elect Rastislav was elected at the 13th General Assembly of the Church in the Czech Lands and Slovakia on January 11, 2014.

“I accept this result of the elections as my service to our Orthodox community which, after the abdication of His Beatitude, Metropolitan Christopher, found itself in a challenging ecclesial and social situation,” wrote Metropolitan-elect Rastislav.  “I have strong faith that Your prayers, which I need at this moment, not only for me as a person, but also for the benefit of the whole community of our local Church, will be heard by the Almighty God, thus reflecting our unity in faith and cooperation in the Lord’s vineyard.”

The date and location of Metropolitan-elect Rastislav’s enthronement, to which an invitation was extended to Metropolitan Tikhon, will be announced in the coming weeks.

“Your Beatitude, Dear Brother and Concelebrant:

“I cordially greet Your Beatitude and wholeheartedly congratulate you on your election as Metropolitan of the Czech Lands and Slovakia.

“Our two Churches have traditionally enjoyed a strong relationship. Many of the faithful of the Orthodox Church in America have ties of kinship with faithful of your Church. Members of our Holy Synod have visited the Czech Lands and Slovakia during the past decades and also during recent years. We honor and celebrate Saint Alexis Toth, canonized by our Church, who led so many faithful people to the Holy Orthodox Faith after their arrival in the United States as immigrants. We remember that Father Alexis was a seminary teacher in Presov before he immigrated to America.

“Your Beatitude, in July 2013 it was a joy to be with you on the pilgrimage from Moscow to Kyiv to Minsk in celebration of the 1025th Anniversary of the Baptism of Rus. I look forward to the continuation and strengthening of the relationships between our sister Churches. Through the prayers of the holy confessor and defender of the Orthodox Faith, Saint Alexis Toth, may the Lord grant you strength and wisdom in your holy ministry.

“With love in the Lord, Your Brother and Concelebrant,
“+ Tikhon
“Archbishop of Washington
“Metropolitan of All America and Canada.”