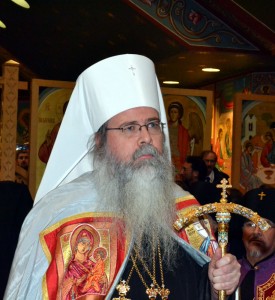 “The 80th Anniversary of the man-made famine in Ukraine, called Holodomor,  which took millions of lives, is a tragic and painful anniversary,” Metropolitan Tikhon wrote.  “On behalf of the Orthodox Church in America I convey to Your Beatitude and to the people of Ukraine our heartfelt solidarity.  The cruelty and inhumanity of Holodomor have left deep wounds in Ukrainian society and in Ukrainian memory.  Yet the Ukrainian people are not alone in their commemoration of the Holodomor.  All those who treasure and honor  the image and likeness of God in every man and woman join you and the whole nation of Ukraine in the sorrowful commemoration of the Holodomor.

“The 20th century gives many examples of disregard for the value of every human life,” he continued.  “Tragically, idolatrous ideologies of the 20th century were born in the context of European Christian civilization. Communist and Nazi ideologies sacrificed millions of lives on the altars of false gods.

“This means that anniversaries of terror and genocide are not only occasions for grief and solidarity,” Metropolitan Tikhon concluded.  “They are also occasions for repentance and commitment to the renewal of Christian values and Christian faith as the foundation of society.”

The text of the letter is available in PDF format.