Rome (AsiaNews) – Mikail, a 23 year old Coptic Egyptian, left his country to seek political asylum in Italy. He is originally from Minya, one of the cities of Upper Egypt in which, after the overthrow of Mohammed Morsi, the Islamist retaliation against Christians has been particularly cruel. “At least 50 churches were destroyed – he tells AsiaNews – our homes and our stores have been marked with a cross. I had a carpenters shop and it was set on fire on Friday, the day of prayer for Muslims, the Georges supermarket (his friend and traveling companion ed.) was set alight in front of his eyes. ” 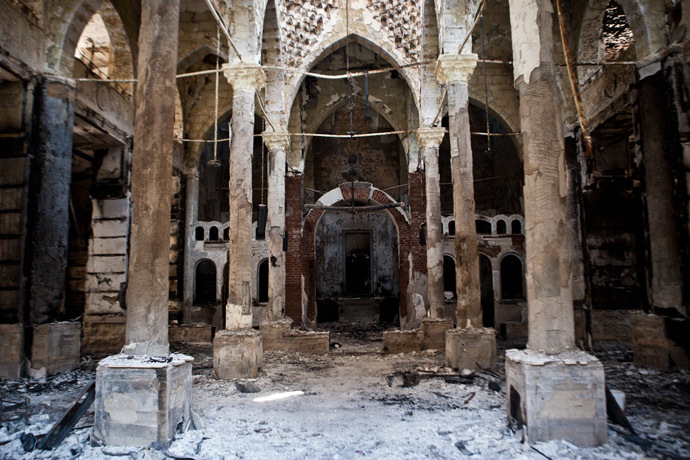 A picture taken on August 18, 2013 shows the Amir Tadros coptic Church in Minya, some 250 kms south of Cairo, which was set ablaze on August 14, 2013. Egypt’s Christians are living in fear after a string of attacks against churches, businesses and homes they say were carried out by angry supporters of ousted Islamist president Mohamed Morsi. As police dispersed Morsi supporters from two Cairo squares on August 14, attackers torched churches across the country in an apparent response. AFP PHOTO / VIRGINIE NGUYEN HOANG

He describes another Egypt, one in which – in spite of the media exaltation – the fall of Hosni Mubarak and overthrow of Mohammed Morsi have had a negligible weight on the difficulties that Christian minority is forced to deal with every day . “Under Morsi the economy collapsed and Islamists have had more freedom – he explains – with Mubarak maybe there was more security for us Copts because the Brotherhood was relegated to illegality , but on a social level , nothing has changed .” And he continues: “The percentage of Muslim democrats is poor and of little influence , the police still do not listen to our complaints , the problem is deeply rooted .”

His story shows that the violence against the Christian minority has escalated in recent months. But it was already a nationwide reality long before the Brotherhood ascended to government. Although the 30-year dictatorship of Mubarak kept taps on radical Islam , discrimination and hostility have always marked the relationship between faith groups especially in the south of the country. ” In Egypt, it is forbidden to build churches , a ban that was in force under Mubarak and continues to exist – says the young man – three years ago, a cousin in Giza spent 40 days in jail because he was helping to build a parish; the police killed two Christians then and the news was reported on websites . ”

Mikail then tells of when he served his compulsory military service in Salloum , on the Libyan border , the only Christian among over a thousand recruits : ” My superior was a Muslim and often punished me making me stand at attention for hours. I had no right to return home like the others just because I am Coptic .  He also remembers when he managed to escape an assassination attempt while he was returning from the service: “They tried to stab me – he says pointing to two scars on his wrists – I was stopped by 4 Islamists who wanted to rob me and kill me.”

Mikail left Cairo by plane on 18 August. Prior to that date had already tried to reach the capital, but had been stopped by a checkpoint of the Brotherhood and sent back home. “They saw that we were Christians – he said showing the cross that is always tied around his neck and tattooed on his wrist – they stole everything and sent me back to Minya .” The second attempt was instead by train and then by plane to Rome. “Our visa was for Georgia with a stopover in Italy , but once here asked for political asylum .” He and his friend Georges are now looking for a job in Rome to send money to their families, while waiting for their asylum claim to be assessed by Italian authorities .

Most viewed articles
The Truth About Riches180
The Muskox Response To COVID-19141
Metropolitan Onuphry Speaks on How to Protect One’s Soul From Sin104
Patriarch Porfirije Thanks the Russian Church for Participation in Restoring Serbian Churches97
Do We Act Differently Than Others?74
Strong Orthodox Presence at the 2022 March for Life58
March for Life participants optimistic for a post-Roe America: ‘This is just the beginning’56
Most millennials, Gen Z adults support bans on abortions when baby’s heartbeat is detected: poll51
Sunday of the Samaritan Woman2
How We Worship: the Struggle of the American Experience1
Most popular authors
Pravmir.com team310
Fr. Gabriel Bilas180
Archpriest Michael Gillis141
Priest Luke A. Veronis73
Ryan Foley56