MIKHAIL Kalashnikov, designer of the AK-47 rifle, told the head of the Russian Orthodox Church before his death that he felt guilty for those it killed.

Kalashnikov, who died in December at the age of 94, in April wrote a lengthy emotional letter to Russian Orthodox Church Patriarch Kirill, Izvestia, a pro-Kremlin daily, reported on Monday. 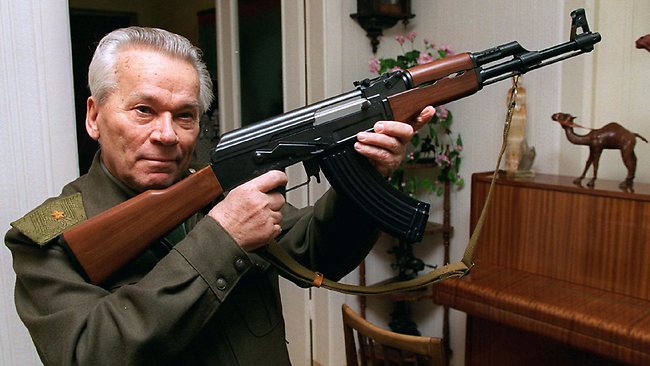 Mikhail Kalashnikov shows a model of his world-famous AK-47 assault rifle at home in the Ural Mountains city of Izhevsk, east of Moscow, in 2007. Source: AP

“My spiritual pain is unbearable. I keep having the same unsolved question: if my rifle took away people’s lives, then can it be that I … am guilty for people’s deaths, even if they were enemies?” he asked.

The typed letter on Kalashnikov’s personal writing paper, reproduced by Izvestia, is signed with a wavering hand by the man who describes himself as “a slave of God, the designer Mikhail Kalashnikov.”

Kalashnikov, whose funeral was attended by President Vladimir Putin, came up with the durable and simple rifle design after experiencing the Red Army’s dire lack of weapons during World War II. 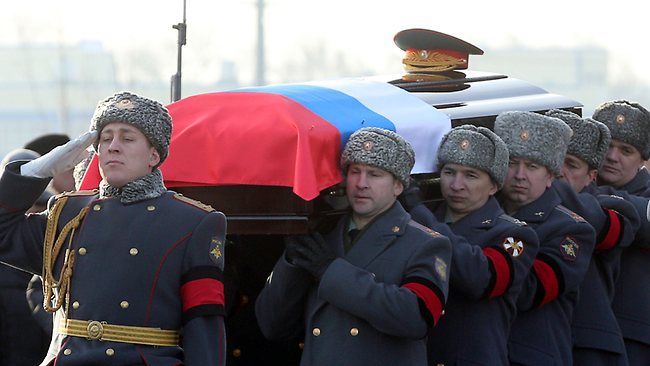 Full state honours… Russian officers carry the coffin of Mikhail Kalashnikov during his funeral ceremony in Mytishchi, outside Moscow.

Now the AK-47 is widely manufactured unlicenced around the world and has become a visual hallmark of armed insurgent movements, including those using child soldiers.

Kalashnikov wrote that he first went into a church at the age of 91 and was later baptised.

“The Church has a very definite position: when weapons serve to protect the Fatherland, the Church supports both its creators and the soldiers who use it,” Volkov said.

“He designed this rifle to defend his country, not so terrorists could use it in Saudi Arabia.”

The Russian Orthodox Church has sought to consolidate its new-found strength after the Soviet era by building up close ties with state agencies and powerful officials.

When Kalashnikov was feted by the Soviet authorities, it would have been unthinkable for him to have declared himself anything else than an atheist.

His daughter, Yelena, told Izvestia: “Of course you can’t say he went to services or lived strictly according to the commandments. You have to understand his generation.”