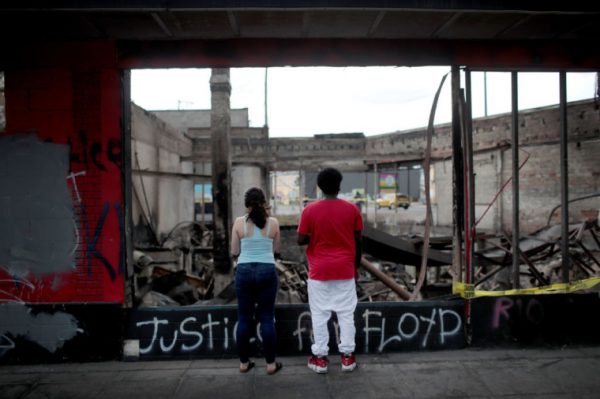 People look at the charred wreckage of a building destroyed during last week's rioting sparked by the death of George Floyd on Memorial Day in Minneapolis, Minnesota, on June 2, 2020. | Scott Olson/Getty Images

Minneapolis Mayor Jacob Frey said the city is expected to need well over $55 million in state and federal aid to rebuild hundreds of structures damaged or destroyed during several nights of violent riots sparked by the officer-involved death of George Floyd.

The city’s Community Planning & Economic Development department has estimated that at least 220 buildings were damaged, resulting in a minimum of $55 million in costs, but that initial estimate is expected to rise significantly, according to the Star Tribune.

The city is “not yet ready to produce a credible estimate” of the losses, City Council members said Tuesday.

“We will do everything we can as we shift to recovery mode,” Frey was quoted as saying. “We’re recovering from crises sandwiched on top of each other, from COVID-19 to the police killing and then the looting which took place afterward.”

The mayor also said he expects the full cost of the damage to be “tens, if not hundreds of millions” of dollars in the Twin Cities.