I want to tell you a story, Father. A true one that happened in my life. Duty-bound as I was, I had to take my service in Afghanistan. I served in one of special forces’ units. I was assigned a mission to accompany ‘cargo-200’ of about three hundred coffins on a military aircraft. There were eight people on board: four pilots and four soldiers from my unit.
| 05 February 2009 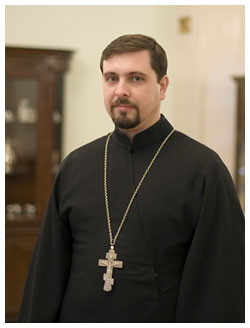 The contemporary world, ‘lieth in wickedness’ according to the Apostle’s word, is ambiguous in its attitude to the notion of miracle. To some people a miracle would mean something too unreal or remote to be reached. To others this is an ordinary everyday reality. To other people this is a lie, deception and profanation. But there are still some people to whom a miracle is God’s gift, a fruit of belief, a powerful finger pointing at the right way of one’s life. These people are Orthodox Christians.  Indeed, there are so many miracles the Lord presents to us who believe in Him.  Strangely enough, the miracles we hear about may evoke the most contradictory feelings that would not interblend but rather complement one another in an unconceivable way.

Holy Fire descending upon the Holy Sepulchre on the Holy Saturday on the eve of the orthodox Easter is a great miracle. It would immediately bring one to the state of a sacred thrill and arouse a great joy about the Risen Christ. The Turin shroud is a silent witness of Sufferings and Resurrection of the Savior, and would on one hand narrate about the great mystery of death to us, and on the other hand would reinforce us in our belief in life.  Myrrh-pouring icons may be a Divine bodement in regards of a certain calamity, and simultaneously can shed the flows of healing.

Most miracles are not explainable in a scientific way, but this incomprehensiveness would encourage a great number of people in their belief.  As a matter of fact, a believer needs no scientific evidence to support the fact that God exists, and if God exists, then our faith is not vain. On the contrary, it brings up rich fruits.

There is a story of this type of a miracle that occurred by faith and brought up real fruits. I had a conversation recently with one elderly person, a retired military man.  I will name him Alexander.  Here is the story this servant of God told me:

“I want to tell you a story, Father.  A true one that happened in my life. Duty-bound as I was, I had to take my service in Afghanistan. I served in one of special forces’ units.  I was assigned a mission to accompany ‘cargo-200’ of about three hundred coffins on a military aircraft.  There were eight people on board: four pilots and four soldiers from my unit.  We took off early in the morning and had to take a dangerous route since we had to fly over the territory under dushmans’ control [afghan combatants; mujahedeen].  No matter how hard we tried, we didn’t escape looking in death’s face. Stingers shot us and our jet began to fall down.  And in this moment the commander implored aloud: “The Most Holy Virgin, Mediatress of the Russian Land, do not let my deceased fellows remain in a foreign land, help deliver them to their homeland and bury them there with honor.”  It sounded like a command to us, and each started to pray silently.

I was baptized in my childhood, at the age of 6 months.  I did not attend church, but I was not an atheist either. This is why I prayed like others, in my own words.  Despite almost zero visibility in the pre-dawn mist and lack of any approach lights the pilots were lucky to land the jet.  We sighed with relief! And here we were mistaken because we were surrounded by dushmans  who demanded to give them the coffins with corpses. They were paid for the number of heads and shoulder straps of the murdered, and they wanted this grand trophy – almost three hundred heads.  We were offered to escape in exchange for the coffins.  At this moment our commander started to pray again: “The Most Holy Virgin, you helped us to save the bodies of the deceased soldiers, so help us to stand up for them and save us from death!”  We realized that there was no way back for us and made up our minds to accept the battle. Forces were unequal. There were 200 dushmans against the eight of us. And, honestly speaking, pilots are no warriors, their profession is different.  However, they were fighting bravely.  This was nothing like a movie, Father, it was hot.  Of course, the idea to fight was not the best one. We realized that we were to fight to death, but we could not retreat and requested aid by radio.  None of us ever knew at that moment whether we would remain alive by the time the aid would arrive.  However, we felt some kind of an invisible support that was giving us the strength to stand against this gang of dushmans wishing to capture our dead.

I’d rather not talk about how the battle went; yet we were able to keep fighting for almost two hours until the aid arrived. Amongst us only one person died, the youngest one.  He left two children. He covered a grenade with his body to save the others, he sacrificed himself for the sake of the rest.  I remember the scene as if it happened only recently.  But my story is not about it, it is about the help that came from the Mother of God.  It was She who did not allow them to desecrate our deceased fellows and saved us from death.  What was that? I can only call it miracle. A true miracle that took place in my life. As for me, I started to attend the church after this incident.  Here I am, praying for the peace of souls of the dead ones and for the well-being of the survived.  And what would you say, Father?”

What would I say to a person who was saved from unavoidable death by the Most Holy Mother of God Herself?   To the person whose prayer and courage withstood the enemy horde. I couldn’t but exclaim: “God be praised for everything!”  And I heard in response: “That is what I keep saying: God be praised for everything. One can hardly enumerate all the benefactions of His.  When I started to attend the church, I viewed my previous life like a movie and found so many miracles. And a whole lot of sins… I wouldn’t have taken any thought about it before.  But the greatest miracle of all is the one I have told you about, the one that led me to God. This is it—the Mother of God brought me to Her Son. And I thank Her for it every day!

This is a story of the miracle granted by the Mother of God.  There are a lot of miracle stories that may be told, and each of them compels us to ponder over the idea that ‘our God whom we serve is able to deliver us’. (Dan 3:17). So, let every one of us bring one’s own fruit of belief to God keeping in mind that ‘so faith without works is dead’ (Jas 2:26). Works are our service to God, fruits of our faith. Let our works be good, let us ‘wait for the God of our salvation’ (Mic 7:7), so that we could hope that the Lord will once tell each of us: ‘…and I will give thee a crown of life’ (Rev 2:10).