Missionaries to set up Orthodox communities of migrants in Moscow 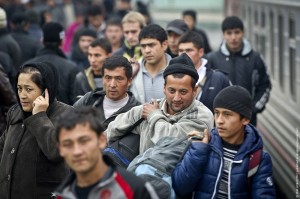 It started on December 31. During the week, over 40 people distributed several thousands of leaflets about Christ and necessity to baptize and discs with the Gospels in Uzbek, Kyrgyz and Tajik, organizers told Interfax-Religion on Wednesday.

Besides distributing leaflets, missionaries spoke with migrants about foundations of the teaching, distinctions of Orthodoxy and Islam.

“The action was held in atmosphere of love, there were no critical commentaries from the migrants who received the materials, on the contrary, many of them sincerely thanked the missionaries and made photos with them,” the interviewee of the agency said.

Today missionaries work to organize Kyrgyz, Tajik and Uzbek Orthodox communities in Moscow where prayer services will be held every week and sections to study Bible and conversations in native for migrants languages.