Source: Basilica.ro
Archbishop Pimen of Suceava and Rădăuți reposed in the Lord on Wednesday, May 20, 2020, at the Matei Balș Infectious Diseases Institute in Bucharest following a second heart attack.
Aurelian Iftimiu | 21 May 2020 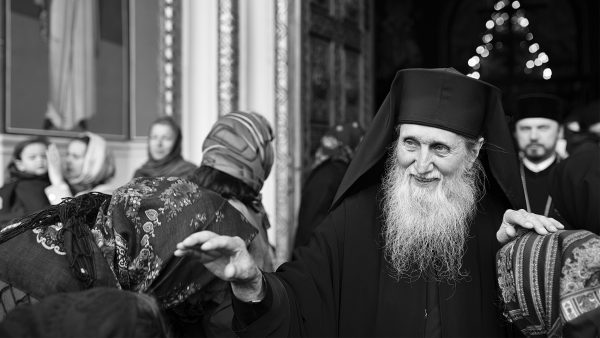 The bishops of the Metropolis of Moldavia and Bukovina expressed ‘much sorrow’ over the death of the 90-year-old Archbishop Pimen, feeling confident that ‘we have gained an intercessor in heaven at the Throne of the Most Holy Trinity.’

‘He was dedicated to the point of neglecting himself in the work of supporting the suffering and, in particular, the elderly.’

‘Over the years, he could be seen working with workers on the construction site of the Archdiocese’s nursing home with the same natural attitude that he then had, serving, preaching, and presiding over administrative meetings.’

‘It was the attitude of a man convinced that every work in the Church is important and that we serve Christ the Lord first of all in front of the Holy Altar, and second by bowing to the feet of the most afflicted on earth.’

‘Archbishop Pimen was one of the strong voices of the Church in recent decades,’ reads the message signed by Metropolitan Teofan and four other bishops.

The hierarchs urged everyone to offer prayers so that God may receive Archbishop Pimen’s soul in his unfading Kingdom of Heaven.

‘If it is that he committed sins in this life, like any man, we hope that they were wiped out by divine mercy. At the same time, we have the sureness that an intercessor was added in Heaven for the good progress of the Romanian Orthodox Church, for strengthening in faith and good deeds of the clergy and believers of Moldavia.’

The message titled ‘Archbishop Pimen, a portrait of the ascetic monk and sacrificial hierarch’ was signed by Metropolitan Teofan of Moldavia and Bukovina, Archbishop Ioachim of Roman and Bacau, Bishop Ignatie of Husi, Bishop Calinic of Botosani, assistant bishop to the Archdiocese of Iasi, and the Archdiocese of Suceava and Radauti’s auxiliary bishop Damaschin of Dorna.