Almighty God has gifted Orthodox Christianity with monasticism. It is the “alternative lifestyle” of Orthodoxy to which some, but not all, are called. Many sources state that the monastic life is the angelic life. Going one step further, some sources even state that God has replaced the angelic ranks that fell with Satan with the men and women who have been called to the angelic (that is, monastic) life.
| 12 April 2010

Almighty God has gifted Orthodox Christianity with monasticism. It is the “alternative lifestyle” of Orthodoxy to which some, but not all, are called. Many sources state that the monastic life is the angelic life. Going one step further, some sources even state that God has replaced the angelic ranks that fell with Satan with the men and women who have been called to the angelic (that is, monastic) life.

When we think of monasticism, several images and ideas come to mind – such as monasteries, the prayer life, and asceticism. But what about evangelism? Does the angelic life have a connection with the evangelical life that we Orthodox Christians are supposed to be living daily (especially those of us in the “front lines” – in our parishes and in the secular world)?

If we turn to the hymnography of the feastday of the Synaxis of the Angels (November 8), in particular to the stichera on “Lord, I call …” at Great Vespers, we get some surprising insights about the angelic life worthy of consideration and application in the monastic life.

The angelic life is one of worship. Stichera 6 states:

As thou hast been manifested standing all resplendent, before the triluminary Godhead, O Michael, leader of hosts, thou dost shout rejoicing with the powers on high, “Holy Father! Holy Coeternal Word! Holy, Holy Spirit! One Glory and Sovereignty, one Nature, one Godhead, and one Power.”

We all share in the angelic life when we gather together and engage in the liturgical worship of the Church. Those of us who have not been called to the monastic life are kept busy with the everyday activities of work, school, and family. It is a blessing to know that we have men and women in the Church who have dedicated themselves to a life of prayer and worship. As a result, the Church around the world at every hour of the day is praying ceaselessly (I Thess. 5:17), even when you and I cannot. How uplifting it is to know that, included in the ceaseless prayer life of our monastics, are prayers for the welfare and growth of the Orthodox Church. 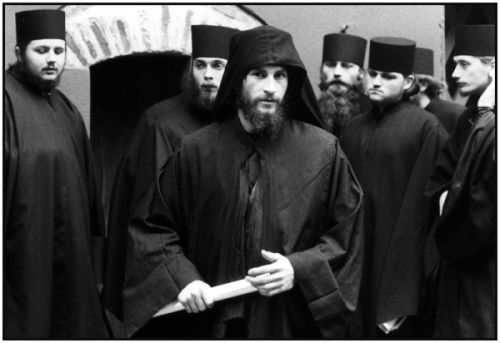 The angelic life is one of obedience to God’s commands. Stichera 5 says:

Thou art of fiery appearance and of wondrous beauty, O Archangel Michael, traversing the spaces with thine immortal nature, fulfilling the commands of the All-creator, and known as powerful by thy might. Verily, thou hast made thy temple a fount of healing, honoured by thy sanctified call.

Jesus Christ, our Creator, gave every one of us (monastic or not) an important commandment that we are all to obey. After His resurrection, He gathered His eleven disciples and spoke to them saying, “Go therefore and make disciples of all nations, baptizing them in the name of the Father and of the Son and of the Holy Spirit” (Matthew 28:19). All Christians know that commandment as the Great Commission. It is the call to evangelism given to the Apostolic Church that all Orthodox Christians should strive to fulfill every day. If the angelic life is fulfilling the commands of the Creator, then one component of the angelic life should be active involvement in the evangelical life of the Church. Monks are to be evangelists!

Verily, the Intelligence before the ages hath appointed thee, by divine partaking, a second light lighting the whole universe, and revealing to us the truly divine mystery, which is from eternity, namely that the Bodiless shall be incarnate in a virgin womb and become Man to save man.

We see that God has appointed those living the angelic life to proclaim the mystery of the Incarnation and all that God has done in order to save man. Monastics are called to be lights; they are to illumine the whole universe with the good news of salvation. The angelic life should proclaim not just the incarnation, but all those things that have come to pass for us – the cross, the tomb, the resurrection on the third day, the ascension into heaven, the sitting at the right hand of God the Father, and the second and glorious coming. Imagine monastic communities in this country with the evangelical spirit of Sts. Cyril and Methodius, St. Kosmas of Aitolia, and St. Herman of Alaska, who themselves were dedicated to venturing out amongst the people to bring them to the true faith.

The angelic life involves safeguarding the Church. Stichera 1 of the feast admonishes:

Demolish, O Gabriel, leader of hosts, the attacks of heretics, rising constantly against thy fold. Heal the division of thy Church; still the tempest of countless temptations, and deliver from hardships and calamities those who eagerly celebrate thy memory, who hasten to the shadow of thy protection, O intercessor for our souls.

Too often we forget that Orthodoxy and Orthodox monasticism is lived out in the time and culture in which it finds itself. There is no “golden age” of Orthodoxy, nor is there any particular culture to which Orthodoxy aspires. The angelic life requires one to be responsible for knowing the Truth and striving to preserve it unblemished so that it is worthy to pass on to all generations and all cultures. This requires monasticism (and Orthodoxy in general) to be free of fundamentalist tendencies and bizarre heretical teachings. These kinds of things do nothing but turn people away from the Orthodox faith and create scandal and division amongst the faithful. A Church divided against itself cannot bear witness to the unity of the faith, and thus cannot properly evangelize. Monasticism should be a defense against heresy and division, not a contributor to them. Monasticism should also be in the forefront of our struggle for Orthodox unity in this country – both administratively and theologically – so that with one voice and one mind we may proclaim the Gospel.

Lastly, there are many other things that the “angelic life” of monasticism in America could do to benefit the spread of Orthodoxy in this country. Through iconography, skilled American monastics could produce affordable, high-quality iconography so that, as the faith grows, we can adorn homes, missions, and churches with “windows to heaven.” Through metallurgy, skilled American monastics could produce much-needed chalices and patens, candlesticks, baptismal fonts, and more, so that we would not have to rely on pricy imports. By making vestments, skilled American monastics could produce affordable, quality vestments for a growing population of clergy needed to fill the ranks of a growing Church. Through translation, monastics could commit themselves to translating into English the vast numbers of patristic writings that still exist only in Greek, Latin, and Syriac. What a blessing to all of us this would be! Additionally, through woodworking, candle-making, teaching, scholarly works, liturgical texts, and other things too numerous to elaborate, we can see how much monasticism has to offer to the evangelical life of the Church in America.

In conclusion, we see that the angelic life – monasticism – can and should be an important component of the evangelical life of the Orthodox Christian faith everywhere. Likewise, we see also that evangelism is a necessary component (among many) of the monastic life. We realize the importance of monasticism for the Church in America in promoting, guarding, and providing for the apostolic faith,. All of us should be praying for authentic monasticism in this country – praying for dedicated men and women who will adhere to the genuine teachings of the Orthodox faith, be obedient to and supportive of our hierarchs, work harmoniously with our priests, and be dedicated to the Great Commission of our Lord Jesus Christ, in accordance with the angelic evangelic life.