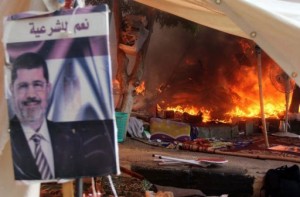 A protest camp is torched in Cairo’s al-Nahda Square, on August 14, 2013. Supporters of deposed Islamist president Mohamed Morsi have torched a church in Sohag in a reprisal attack after police dispersed demonstrations in Cairo, according to the MENA state news agency.

The assailants threw firebombs at Mar Gergiss church in Sohag, a city with a large community of Coptic Christians who comprise up to 10 percent of Egypt’s 84 million people, causing it to burn down, the official MENA news agency said.

Security officials told AFP that another two churches were attacked in El-Menia province, leaving them partially damaged by fire.

Dozens of Morsi supporters were killed on Wednesday as security forces moved in to disperse them from two major protest camps in Cairo that they have occupied since around the time the army ousted him six weeks ago.