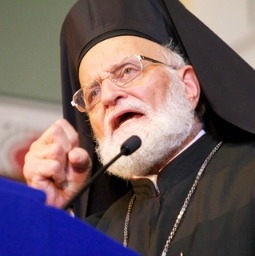 DAMASCUS — The Vatican’s nunciature in Damascus was hit by a mortar round at  6:30am  on Tuesday, damaging the building but neither killing nor injuring  any persons.

“Given the hour, there was only material damage, not to people,” Vatican  spokesman Jesuit Father Federico Lombardi said in a Nov. 5 press conference.

“Had it been later, it would have been much more dangerous,” he said. “Thanks  to God, no one was hurt.”

The mortar hit the embassy’s rooftop, and, according to The Associated Press,  it is “not clear” if the building was targeted.

Archbishop Mario Zenari, apostolic nuncio to Syria, told Vatican Radio that “we do not know why it happened. … We cannot say that the Vatican Embassy was targeted.”

The Assad regime’s news agency, SANA, reported that the mortar shell was  “fired by terrorists,” the government’s term for the Syrian rebels with which it  has fought a two-year civil war.

SANA went on to say that “targeting the apostolic nunciature and diplomatic  missions in Damascus comes in the framework of the terrorist groups implementing  their backers’ instructions in a bid to influence the stance of these missions  in support of peace and security in Syria.”

The Syrian conflict has now dragged on for 31 months, since demonstrations  sprang up nationwide on March 15, 201, protesting the rule of Bashar al-Assad,  Syria’s president and leader of the country’s Ba’ath Party.

In April of that year, the Syrian army began to deploy to put down the  uprisings, firing on protesters. Since then, the violence has morphed into a  civil war that has claimed the lives of more than 115,000 people.

The rebels are fractured among diverse groups, including moderates and  Islamists, as well as Kurds.

Two weeks ago, Islamist rebels, including al-Nusra Front, an al Qaeda  associate group, occupied Sadad, a majority-Syriac Orthodox town almost 40 miles  south of Homs. On Oct. 21, the Islamists seized the town, holding Christian  families as “human shields,” according to Aid  to the Church in Need, to prevent regime forces from retaking the  village.

Churches were desecrated, and the rebels killed 45 of the inhabitants,  including a family of six who were thrown down a well. The Syriac Orthodox  Metropolitan of Homs and Hama, Archbishop Selwanos Boutros Alnemeh, told Fides  that the Sadad attack has been the “most serious and biggest massacre of  Christians” in the Syrian civil war.

“How can somebody do such inhumane and bestial things to an elderly couple  and their family?” Melkite Greek Patriarch of Antioch Gregorios III told Aid to  the Church in Need Nov. 4.

He said, “I do not understand why the world does not raise its voice against  such acts of brutality.”

Patriarch Gregorios called for an end to the transfer of arms into his  country and said the attack on Sadad shows “the rise of fundamentalism and  extremism” in Syria, adding that “it is frightening the Christians into leaving  the country.”

The Syrian regime retook Sadad Oct. 28, after many of the town’s inhabitants  fled the week-long violence, joining the 6.5 million Syrian people who have  become internally displaced by the war.

In addition, there are at least 2.1 million Syrian refugees in nearby  countries, most of them in Lebanon, Jordan and Turkey.

The papal nuncio, Archbishop Zenari, said, “The Syrian people want that the  violence should stop immediately. They are fed up with this conflict.”