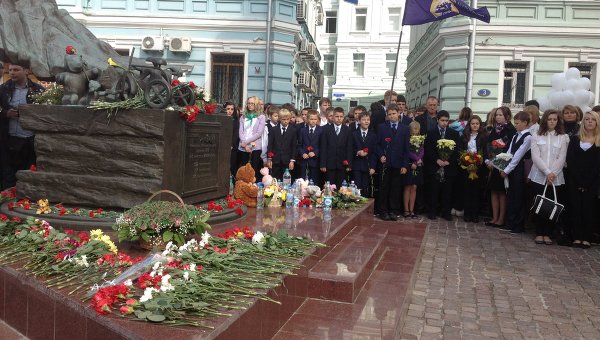 MOSCOW, September 3 (RIA Novosti) – In a solemn memorial ceremony on Tuesday, Moscow marked nine years since more than 300 hostages, most of them children, were killed in a school seized by Chechen separatists in the southern city of Beslan.

The ceremony, which took place at a downtown Moscow memorial to the tragedy, began with a moment of silence, during which 334 white balloons – the number of people killed in the siege – were released into the sky.

Dozens of Muscovites, including many students, laid flowers and toys at the memorial, outside the Church of the Nativity of the Blessed Virgin Mary in the city’s Kitai-Gorod neighborhood.

Armed separatists seized the school in Russia’s North Ossetia Republic on September 1, 2004, the first day of the academic year. They demanded independence for Chechnya, a nearby republic that had seen two separatist wars since the end of the Soviet Union.

The siege lasted three days before Russian security forces stormed the building. Russia soon toughened anti-terrorism laws and expanded the powers of law enforcement agencies. The country now marks September 3 as a “day of solidarity in the fight against terrorism.”

Most viewed articles
First Church in the Antiochian Archdiocese Named for St. Xenia of St. Petersburg Prepares for Feast Day284
Patriarch Kirill: Not Only People, But Churches Too, Can Depart from God160
My World’s Different104
Patriarch Porfirije of the Serbia: Our Position on the Church Issue in Ukraine Has Not Changed89
Brooklyn Street Co-Named for Antiochian Pastor Who Served a Half Century There87
Thoughts on Theophany and Revelation76
Metropolitan Hilarion: the Church and traditional confessions have done everything possible to improve the situation in Kazakhstan74
A Christianity of the Catacombs63
Archbishop Makarios of Australia: ” the Great privilege of the Orthodox Church is that we live in communion”20
4-400×6001
Most popular authors
Pravmir.com team627
Protopresbyter Themistoklis Mourtzanos104
Peter Samore87
Elissa Bjeletich76
Archpriest Lawrence Farley63