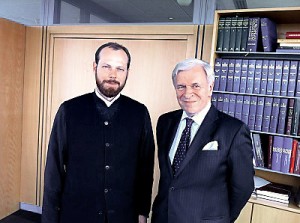 On June 21, 2012, Hegumen Philip (Riabykh), Moscow Patriarchate representative to the Council of Europe, met with President of the European Court of Human Rights (ECHR) Nicolas Bratza. They discussed the present tendencies in the development of the human rights protection system in Europe. Father Philip informed the ECHR president about the work carried out by the Russian Orthodox Church in the area of human rights and convey him the document adopted by the 2008 Bishops Council ‘The Russian Orthodox Church’s Basic Teaching on Human Dignity, Freedom and Rights’.

Giving a high assessment to the ECHR’s work to protect individual freedom, Father Philip pointed to the danger brought about by the attempts to absolutize the free choice of the individual, especially when it is made to the detriment of the rights and freedoms of other people. The priest spoke for the development of a system for human rights protection in a way that it may be adequately consistent with its task to safeguard the freedom of most people in society. To achieve this goal, it is necessary to reinforce moral norms as a natural regulator of interpersonal relations. He expressed in particular a concern for the fact that the European Court of Human Rights brought in a number of verdicts which can be interpreted as interference in the internal life of religious organizations. As an example of such decisions, he cited the ECHR’s ruling on the cases of Innokenty vs. Bulgaria (2008) and the Good Shepherd trade union vs. Romania (2012).

Mr Bratza agreed that in the recent time the Strasbourg Court has seen a considerable increase in the number of cases concerning interests of religious communities, the Russian Orthodox Church website in Strasbourg has reported.

The Moscow Patriarchate representative expressed the concern of Orthodox believers for possible results of a number of high-profile cases claimed by people from Great Britain. First of all, there are two cases concerning the wearing of underwear crosses in public and two appeals concerning the discrimination of employees on the ground of their commitment to Christian morality (in the first case, a Christian woman refused to register a same-sex union, in the second one, a psychologist for family issues who confesses Christianity refused to consult a same-sex partners.

It was also noted that a considerable concern is caused by the outcome of the cases considered these days by the ECHR concerning surrogate motherhood and euthanasia. Father Philip stated that believers do not try to impose their own views but seek to ensure that the present system of human rights protection may allow them to have a critical attitude to things which contradict Christian morals, without being subjected to discrimination for their attitude.

Father Philip also informed his interlocutor about a project for building an Orthodox church in Strasbourg. The ECHR president, on his part, expressed support for this initiative.

Source: Department for External Church Relations of the Moscow Patriarchate