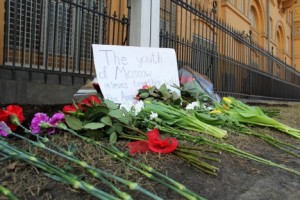 After two bombs blasted in Boston during a marathon, Russia expressed its deepest sorrow over the attacks. Ordinary Russians with flower bouquets gathered outside the U.S. Embassy in Moscow to offer their condolences.

A bunch of flowers is scattered in front of the American Embassy in Moscow. A poster hanging by the Information stand for American citizens reads: “The youth of Moscow grieves together with the American people.” A candle nearby sheds its light.

Meanwhile, Muscovites keep gathering and leaving flowers to show their solidarity to the U.S. people who fell prey to arecent terror attack during the Boston marathon.

“When I found out about this awful event I decided to bring flowers to the U.S. Embassy,” said pensioner Alina Sirotinskaya. “I often attend gatherings when this kind of tragedies happen. I was there to commemorate the victims of the terror attack in the Moscow subway a couple of years ago and today I could not help but coming to the Embassy. I also have some friends in Boston.”

“I think that if Russia and the U.S. fostered friendly relations more vigorously, we could avoid or at least minimize the likelihood of such attacks,” she added. “Those people could become afraid of committing terror acts, if our countries teamed up.”

A couple – Anna, 34, and Alexander, 47 – came to the U.S. Embassy to remind themselves that the world is too small and terrible events in the other hemisphere have an impact on the rest of us.

“There is no need to talk about politics and [collaboration in the fight against terrorism] to show your solidarity to the people [killed and injured during the terror act],” said Alexander. “You don’t need much fantasy to image all suffering the victims and their relatives are going through. After all, this could have happened anywhere and at any time. You never expect such things to happen. Everybody can become a victim. This can happen to you, your friends and relatives in any part of the world.”

“The world has narrowed and the Boston events resonate in Moscow,” Anna said. “I belong to the big world. And America is part of this world. It could have been me or one of my relatives at the marathon. And it’s that thought which drove me here.”

Natalya Supyan, 30, a sport enthusiast, was shocked when she learnt of the explosions, especially because it happened during a marathon. Sport events should represent an encouragement to people to strengthen their willpower and overcome mutual disagreements – in this case, she was touched by how people came together to grieve those who had been killed and injured in the Boston attacks.

“I like sport very much and that’s the reason why I came here,” she said. “I was astonished. If it happened elsewhere I could contribute by donating money or giving donor blood. In this situation I can’t do anything but bring flowers to the American embassy.”

Pensioner Alla Balkhavitina came to the Embassy to show her solidarity to the “innocent people who suffered as a result of the attack.”

“It was just an quick impulse of my heart,” she explains.

“I love all people, including Americans,” said Rostislav Striga, 33. “While the world powers are busy being at war, the U.S. citizen suffers as well.”

Mikhail Margelov, chairman of the upper chamber of Russia’s parliament, believes that the Boston explosions indicate that Russia and the United States have a common and omnipresent enemy. “What happened in Boston comes as a reminder that we need to consolidate cooperation rather than compiling lists that divide,” he told Interfax.

Margelov explained that, although the Boston explosions did not have the same death toll as the terrorist attack that destroyed the Twin Towers on September 11, 2001, they still pose a big threat, because terrorists seek both to kill people and send certain intimidating signals.

“In this case, they chose the center of a large U.S. city, a traditional event that draws hundreds of people from different countries, police, participants, viewers to the finish line. The explosion was intended to demonstrate the near omnipotence of those who staged it,” he said.

U.S. Ambassador to Russia Michael McFaul has thanked the Russian readers of his Twitter page for their words of support following the two explosions.

“Thank you for all the words of solidarity here. As Obama said President Obama [sic]: “Boston is a tough and resilient town. So are its people,” McFaul tweeted from his account on Tuesday.

McFaul was joined by the U.S. Embassy in Moscow, which expressed its gratitude to those Russians who came to the embassy to leave flowers.