The Moscow Synodal Choir was on tour to Moravia in the end of November. The tour was organized by the Elizabeth and Sergius Educational Society, the Foundation for the Revival of the Moscow Synodal Choir and the Czech advertising agency SNIP&CO with the support of the South Moravia and Zlin administrations, the Russian general consulate in Brno and the Znojmo City Council. This event became part of the Russian Culture festival in the Czech Republic and was dated to the 1025th anniversary of the Baptism of Rus’ and the 1150th anniversary of the coming of Ss Cyril and Methodius to Great Moravia. 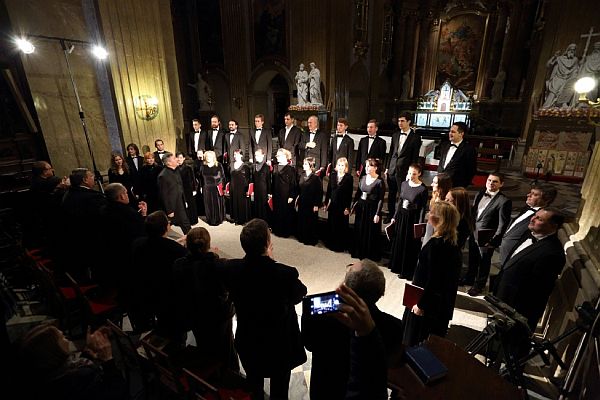 Concerts were given in Velegrad, Znojmo and Brno. Czech people received a unique opportunity to hear religious compositions by Rachmaninov, Tchaikovsky, Chesnokov, Sviridov, Bortnyansky, Davydov, Lvov and Kastalsky. The Russian choir’s performance provoked a sincere interest and was given an enthusiastic reception. Listeners thanked the choir, noting that the Russian church music helped them to come to a better knowledge of the spiritual profundity of the Russian people who have the same Slavic roots as the Czech people.

An exhibition of Russian church art “A Living Tradition” was held as part of the Moscow Synodal Choir’s tour. It displayed works produced by the artistic workshop of Natalia Gorkovenko and the Bronze Wonder gallery. The visitors could see icons adorned with colourful silks, gold and silver threads, pearls, precious stones, etc., as art pieces linked with Christian heritage and reflecting an artistic search of masters developing old traditions.

The concerts given by the Moscow Synodal Choir and the exhibition of modern church art became a prominent event in the cultural life of Moravia.

The Synodal Choir, one of the oldest professional choirs in Russia, was founded in 1721 in Moscow on the basis of the choir of Patriarchal singing clerks dating to the late 16th century. The Synodal Choir is directed today by Aleksey Puzakov, a Russia’s Honoured Artist.