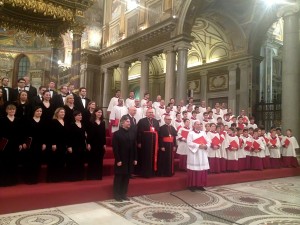 With a blessing of the chairman of the Department for External Church Relations, Metropolitan Hilarion of Volokolamsk, the Moscow Synodal Choir conducted by Russia’a Honoured Artist A. A. Puzakov, took part in the 12th International Spiritual Music Festival held from October 29 to November 10, 2013, in Rome. It is organized by the Pro Musica e Arte Foundation in cooperation with the Vatican.

On November 3, the Moscow Synodal Choir conducted a joint rehearsal with the Pontifical Sistine Chapel Choir conducted by Mgr Massimo Palombella. After that the choir met with Pope Francis who expressed joy over the fact that one of the best choirs of the Russian Orthodox Church participated in such a significant cultural event as the annual festival of spiritual music in Rome. As a greeting, the choir on its part performed for the pope several Russian church hymns and sang “Many Years of Life” to the head of the Roman Catholic Church.

In the evening of that day, a joint concert was given by the Moscow Synodal Choir and the Sistine Chapel Choir at the Basilica of Santa Maria Maggiore. Before the concert, Cardinal Leonardo Sandri, prefect of the Congregation for Oriental Churches, read out a message of greetings from Pope Francis who underscored the importance of the event from the point of view of cooperation between the Russian Orthodox Church and the Roman Catholic Church in the field of culture.

The audience gave the singers a long ovation. The concert was broadcast live by Vatican TV. The Russian TV network “Rossia-Kultura” shot a report about this significant event.