Mosque and school spark new feud between Turkey and Greece 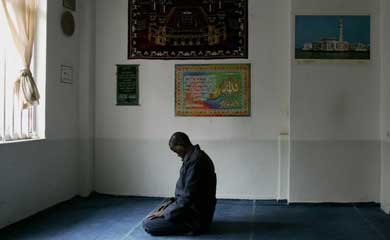 Greece and Turkey, which share a history marred by bitter territorial disputes and Christian-Muslim feuds, are at loggerheads once again over religion.

The latest row erupted after Greece flatly rejected the idea of reviving two Muslim mosques in Athens in return for the reopening of an Orthodox clergy school in Turkey.

Mosques have been a thorny issue for a long time in Greece, where the population is predominantly Greek Orthodox. Athens is one of the few European capitals without an official mosque.

The Halki seminary has also been a subject of controversy. The Orthodox clergy used to train in the school located on an island off Istanbul but it was closed in 1971, after Turkey fell out with Greece over Cyprus.

Turkey, a country where Muslims make up 99 percent of the population, recently decided to give back to the seminary lands that had been seized in 1943, but there was no talk of reopening.

“While we return something, we have the right to expect the return of other things,» said Turkish Prime Minister Recep Tayyip Erdogan, who said he wanted two mosques revived in exchange for the seminary.

“Greece’s position on the subject (the re-opening of the seminary) is clear, (it is) in accordance with international law and has been expressed on numerous occasions,» Greek Foreign Minister Evangelos Venizelos said earlier this week.

Any further public discussion on the matter would be «counter productive,» Venizelos said when asked to comment on Erdogan’s suggestion.

Erdogan also wants Greece’s Muslims to be able to elect their own Mufti (religious leader), something that the Greek government is currently in charge of.

Greece is home to around 500,000 Muslims — many of them undocumented migrants — including a community of over 100,000 Greek citizens of Turkish origin in the country’s northeast.

The issue of mosques in Greece started popping up shortly after 2000, as the 2004 Athens Olympics were looming up.

With an increasing number of migrants from Pakistan and other Muslim countries having recently found their way to the Greek capital, the matter has become more pressing and in 2011 the government approved the construction of a mosque in Athens.

But there were no immediate signs of interest in the project, in view of the Greek Church’s reluctance, objections by local residents and protests by far-right activists including neo-Nazi party Golden Dawn.

In September, the ministry of infrastructure launched a fourth call for offers for this project which will cost some one million euros ($1.4 million).