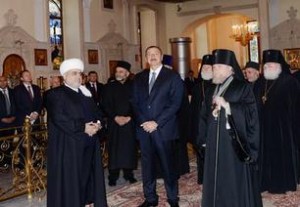 On 15 November, the Orthodox religious and cultural centre of the Baku and Azerbaijani diocese, built on the site of the Holy Myrrh-bearing Women Cathedral was opened.

President Aliyev met with Archbishop of Baku and Azerbaijan father Alexander and Chairman of the Caucasus Muslims Board Allahshukur Pashazade.

The church bells rang in honour of the president.

The head of state was presented bread and salt.

Azerbaijani President met with representatives of the Moscow Patriarchate, Archbishop Theophanes, Vicar of the Moscow diocese, Archbishop Yevgeniy Vereyskiy , Archpriest Vsevolod Chaplin, leaders of the religious communities in Azerbaijan and other guests.

Here, the choir sang a prayer.

Archbishop Alexander of Baku and Azerbaijan informed about the history of the church. It was noted that the Cathedral of the Holy Myrrh – bearing Women was built in 1907. In 2001, great leader Heydar Aliyev attended the opening ceremony of the religious temple after its reconstruction. Thus, the cathedral had all the conditions for Orthodox religious practices.
The president visited the Orthodox religious and cultural centre of the Baku and Azerbaijani diocese. The centre was built at the instruction of President Ilham Aliyev. The four-storey building, the construction of which began in 2012, has a space for various activities, including conferences and seminars, and the necessary conditions have been provided for the Sunday school and church education.

It has been reported that there are separate rooms for various religious committees of the diocese, canonical rites, for catechesis, as well as for church media. The centre also has a library, and there are special rooms for guests.

On behalf of the Diocese of Baku and Azerbaijan, President Ilham Aliyev was presented Saint Mary’s icon “Pride and Consolation” as a gift.

The head of state signed the guest book of the centre.

Then, he spoke at the tea table with the participants of the ceremony.

“Congratulations to all of us with the opening of the religious and cultural centre of the Azerbaijani and Baku diocese of the Russian Orthodox Church. This is a significant event in the life of our country. We’ve been waiting for this, and, of course, the opening of the centres is a measure of inter-religious relations in Azerbaijan.

Of course, there was the need for a religious and cultural centre at the church, which also serves as an office for the leadership of the diocese. There were some difficulties, because the early 1990s was a period of confusion and chaos in Azerbaijan. A lot went wrong. And the area around the cathedral was essentially captured. But then we took effective measures. This territory was transferred to the diocese, and the Azerbaijani state built here a beautiful building. This is also an indication of how interreligious relations are carried out in Azerbaijan. It has a deep history. The temple was built at the beginning of the last century with the active participation of the Azerbaijani philanthropist and was rebuilt in the period of independence at the means of the Azerbaijani businessman. The religious- cultural centre has been built at the expense of Azerbaijan. This practice is very positive. It exists and has deep roots. The same can be said about the restoration of mosques, which are restored at the expense of the state. The same can be said about the synagogue, which was built at the means of the state, and the Catholic Church, in the restoration of which the state also participated.

We are restoring all the religious monuments, and Azerbaijan is a country which intersects the religions and the people who have always lived in peace, harmony and cooperation. We are proud of the fact that the oldest church in the Caucasus is in Azerbaijan, in a small village near the city of Shaki. One of the oldest mosques, which was built in 743, is also in Azerbaijan, in Shamakhi. It has been restored this year. In Baku there is a temple of Zoroastrian worshipers, which is a monument for our historical past. The Catholic Church, which was destroyed has been rebuilt, synagogues are being built as well. That is a measure of our society in the first place, the state of society, as well as the measure of government policy. It is good that the society and public policy in these matters are close to each other.

Multiculturalism is a state policy of Azerbaijan. It’s also a way of life. And the recently held third Baku International Humanitarian Forum mostly discussed multiculturalism. Today Azerbaijan is already recognized as one of the world centres of multiculturalism. And we focus on these issues, because there are different approaches to the subject. Unfortunately, there is a view that in some countries, multiculturalism has come to grief, did not work, and there are very alarming statements and trend. If this is the case in reality, it is a topic for serious discussion. In Azerbaijan, we believe that the politics and the state of the society prove that multiculturalism is alive. It lives, it gets stronger and it has deep roots. It is the only way for the development of mankind in the future, because in the age of globalization, when the exchange of information and, in general, the processes of integration is active, engaging in self-isolation is simply disastrous.

Most countries in the world are multicultural, where representatives of different nations and different religions have been living for centuries, and the friendly and fraternal relations between people of different religions are the basis for the future development of all countries. Therefore, today’s event, perhaps, has more important meaning than just the creation of conditions for the normal functioning of the Russian Orthodox Church in Azerbaijan. It has a great symbolic meaning. This day is based on the history of our country, our people, and it is the result of the policy that we do. And at all events on all holidays – Muslim , Orthodox, Catholic and Jewish – the leaders of all denominations are always together at one table. This is also, I think, one of the precious treasures of our country.

Once again, I congratulate you heartily. I am very glad that we are together and are celebrating this great event with the participation of guests. I am sure that there will be all conditions for work. The topics that we are discussing are constantly in the focus, and they will constantly bring very good results.

Once again, I congratulate you and once again welcome the guests.”