Musings on Money and the Financial Health of the Church 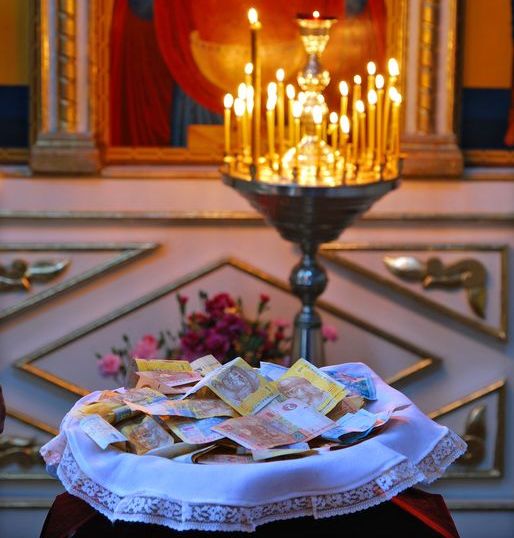 A few years ago I went to my first clergy laity conference for our Metropolis. The venue was beautiful, the food and laughter were plentiful, and I had breakfast with our Metropolitan. However, one aspect of the conference really disturbed me. The two day event was dominated by one topic – money. Not too soon after I became Parish Council President and now continually I deal with church finances. Every Parish Council meeting and every General Assembly I have facilitated garners little comment and feedback when our clergy or myself discuss theological or sacramental issues but when the topic of budgets, stewardship or anything financial comes up, I am usually drilled with questions.

Recently I have begun to have a change of heart and mind, on the topic of money and how we should approach stewardship.

My change of heart began when in the midst of an hour long discussion about money in the context of what the Metropolis needed from the parishes, a priest stood up and said at some point he would like us to discuss why baptisms and Chrismations in our Metropolis showed a downward trend during the last few years. The facilitator said thank you for your comments and moved the discussion right back to money. It was an iconic moment because to me it was an illustration of something we need to immediately correct in our Church. We often focus on our financial health at the expense of our spiritual health.

I pulled Father Dimitrios aside and suggested that he preach a sermon one Sunday and tell the congregation it is about financial health of the Church but then never mention finances again and speak strictly on the our spiritual health and how to maintain and grow it. I think the message would be clear. I said this to him because many things struck me as I sat there and observed and later pondered. I believe most of our clergy and laity are devoted to Christ and the Church. I also believe that the Orthodox Church holds the treasure of true Christian theology and practice because of our sacramental understanding and practices. Yet we seem to be creating our own obstacles to promoting our theology and sacramental understanding to our faithful due to money and the worry that comes with it.

As laity we don’t give enough money to our Churches. Our Churches evolved from a culture where the states paid for Church, in full or in part, so we do not have the culture of giving like Protestant churches. Our lack of giving as laity is the root cause of most of the financial issue we have.

Most Orthodox Churches are not able to survive on stewardship alone. This of course leads many clergy at the parish, metropolis and archdiocese level feeling compelled to both talk about and focus on money more often than they would like because they live with the constant anxiety of not having enough to operate the Churches and the associated ministries. Unfortunately, laity get repelled from this talk and then often feel like Church is all about money. Yet in larger part we are responsible for this. We often say we want our Priests to be more spiritual but we create the conditions and expectations for them that lead to worldly focus on finances.

It’s a tough cycle but it’s easy to sympathize with all parties involved. We can all relate to money worries, especially those of us supporting families and living on budgets. The anxiety we feel can be overwhelming at times and even though Jesus said not to worry about tomorrow and seek first God’s Kingdom and all will be given to us, meaning our daily needs will be met (Matthew 6:33). This anxiety we feel can erode our trust. Clergy are not immune to this erosion either. At least as individuals we can think about ways based on our direct efforts to make more money but clergy are in the unenviable position of having to ask if people don’t volunteer or come up with fund raisers and other events that make them have to focus a large part of their time on money.

The reason I said I had a change of heart on the subject of money and stewardship is that the conference made me reflect very critically on my recent behavior and my own disproportionate prioritization of thought and time when it comes to money. As the President I see the church financial statistics every month. Stewardship accounts for less than sixty percent of our total revenue. My reaction and what I said in many parish council meetings is that we needed a consistent and uniform effort to raise awareness about stewardship and educate the congregation on church finances. I said that the priests needed to talk about it on Sundays; we needed a consistent article every month in our church newsletters, and needed to make it part of our weekly email ministry and part of our web site.

I think I may have been wrong.

During the clergy laity conference I heard several priests talk about their experiences with money and how often in their lowest moments or simply when they were not even thinking about it, checks arrived and often from very unlikely sources. I have experienced this on a personal level. Yet, we still can’t seem to have this total trust that God will provide. This does not mean we should sit back and do nothing. We of course need to plan and do our part. The issue here is one of priorities.

My change of heart is now that raising money and the levels of stewardship requires us to be counter intuitive and actually do practice what we preach and do what Christ said and seek God’s kingdom first and trust. This means prayer and fasting, not talking about money constantly and focusing on the following first: worship, religious education, and outreach. It also means reaching out to our own very large group of people to genuinely get to know them and talk about stewardship in terms of love for the church and ways to serve and not just about money.

I read a book several years ago called Do What You Love, The Money Will Follow. The main principal the book advocated was its title. If we do what we love to do, the money will come. The same holds true for our church. If we love our church and its people the way we should we would not ever have many discussions about money. This is not a “prosperity gospel” message. I am not saying we would overflow with financial riches, I am saying in our hearts we would have our priorities in order, have greater collective peace, and likely a healthier balance sheet.

The world worries about money. It’s all too normal and natural unfortunately. But so much about Christianity turns the worlds value’s upside down and is counter intuitive to our first thoughts and reaction. Christ, God Himself, entered the world in squalor not majesty. He chose twelve men, one of whom failed, and many who were in the lower class of society, to spread His message and they changed the world. Moses and Paul were not impressive speakers (Moses stuttered and Paul by his own admission didn’t talk publicly well), yet they became the greatest respective leaders of faith in their era. Gideon conquered thousands of foes with only three hundred men. Samson was of normal physique yet possessed supernatural strength. God spoke to Elijah as a still small voice within not in the wind, earthquake or fire. These are but a few examples from the Bible but we also have a long history of saints who against bodily, worldly limitations and improbable odds accomplished great things out of their heart for God that allowed the Holy Spirit to work within them and through them.

As Churches we need to do the same. We need to focus on the three priorities mentioned above and trust God to provide. In that trust, we must not be passive, but also as Christ advocated, plan and work on a daily basis to maintain and run our churches. This is required of us but we should not worry. If it sounds idealistic we should remember it’s the very model Jesus advocated and we should do no less.