My journey to Orthodoxy

I had made no actual steps towards becoming Orthodox while on my MA and when my friend returned to Romania he told me if I was interested in doing so I should visit the Monastery of St John and Baptist in Essex. This I did, booking myself in for a two-night stay. The first Orthodox service I ever went to was a two-hour recitation of The Jesus Prayer, at 6am, in the dark. I was definitely thrown in at the deep end. I’d like to say I was overcome by a feeling of peace and understanding but in truth I had a pounding headache and felt completely lost and alone.
Harriet (Xenia) Mastrangelo | 11 November 2009

People who ask me about how I came to Orthodoxy are often surprised to hear I have no Christian background. To me it is not surprising at all, for I have always felt a call to God in my heart. Outwardly this manifested itself during my childhood in a natural willingness to participate in worship when the opportunity arose (usually by accompanying my grandparents to church), my attraction to and sympathy with people of faith, and my instinctive desire to pray in times of pain or anguish. But more so in my inward life. My questions, yearnings and thoughts – a feeling of wonder and awe at the world and the human person, a sense of the infinite, the unfathomableness of love, of death – brought me continually to the threshold of a belief in God.

For many years I was happy to hang there, but knew, in the back of my mind, that this was something I would have to seriously address at some point in my life. That point came during 2004 when I was at the University of Warwick studying for an MA in Creative Writing. There are many reasons, I suspect, why questions of spirituality suddenly became more pressing. I was living alone for the first time. I was writing – an occupation which required me to spend a lot of time inside my own head. But I had also made friends with a Romanian Orthodox, a poet, and naturally found myself wanting to talk to and question him about such things. 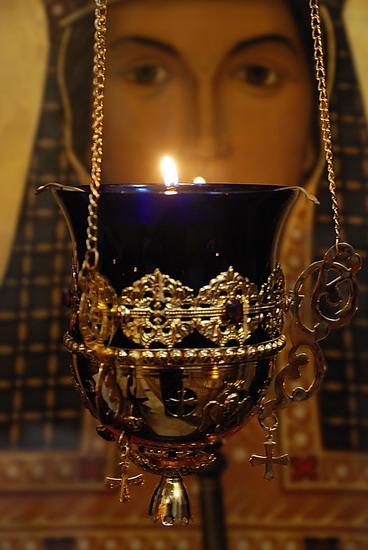 I had never heard of Orthodoxy and was intrigued by his faith but I was more concerned with the fundamental issues of faith and Christianity. My question was not do I want to become Orthodox but do I believe in God? In Jesus Christ his Only Begotten Son? My encounter with Orthodoxy was therefore simultaneous with my encounter with God. I can only say that as I started to read and learn about it I found it impossible to let it go. I never considered entering any church but the Orthodox Church even though, on the outside, everything seemed to discourage me from doing so.

I had made no actual steps towards becoming Orthodox while on my MA and when my friend returned to Romania he told me if I was interested in doing so I should visit the Monastery of St John and Baptist in Essex. This I did, booking myself in for a two-night stay. The first Orthodox service I ever went to was a two-hour recitation of The Jesus Prayer, at 6am, in the dark. I was definitely thrown in at the deep end. I’d like to say I was overcome by a feeling of peace and understanding but in truth I had a pounding headache and felt completely lost and alone. My headache went but the other feelings stayed with me for the duration of my visit. I enjoyed taking walks along the quiet lanes and picking blackberries from the hedgerows, but in the monastery I felt a stranger, out of place, clueless, continually afraid of doing or saying something wrong. I couldn’t wait to get out of there.

But even so, almost as soon as I did I began to appreciate the value of what I had experienced. Something had lodged itself deeper than my conscious unease. I understood that the monastery held something infinitely precious. Every so often I found myself thinking of the life there and felt glad just to know it was going on.

On the advice of one of the Fathers at the monastery I took things slowly. For the first year or so I didn’t attend services. I read and I prayed. The following year I returned to the monastery for another two nights and after that decided to try and find a church to attend near me in London. I struggled, for a long time, to find a church where I felt comfortable and that worshipped regularly in English but eventually I met an English Orthodox girl who told me about St Botolph’s. A couple of weeks later I popped in for a few minutes during the Divine Liturgy and even in that very short space of time sensed the warm, welcoming spirit of the congregation and the priest, Fr Michael. I returned for the next service a couple of weeks later and St Botolph’s became my regular place of worship, although it was to be another 18 months before I was received into the Orthodox Church.

In June 2007 my boyfriend of 10 years, Joseph, proposed. By that time I knew clearly that I wanted to become Orthodox, and to be married in the Orthodox Church. Joseph, a Roman Catholic, felt happy that this should be so and in the spring of the following year I became a Catechumen.

I was baptised at St Botolph’s on 4 May 2008. My Romanian friend, now a Hieromonk at Rasca Monastery in Moldavia, came over to be my godfather and, a week later, on 10 May, served at Joseph’s and my wedding. Both ceremonies were indescribably beautiful and I have since felt the deep joy that both my faith and my marriage have given me.

That’s not to say I don’t still have my doubts and my struggles. But I am encouraged by the words of Metropolitan Kallistos Ware when he writes: “true faith is a constant dialogue with doubt.” My baptism was not the end but just the beginning of my journey. To quote Metropolitan Kallistos again, “to be a Christian is to be a traveller . . . We are on a journey through the inward space of the heart, a journey not measured by the hours of our watch or the days of the calendar, for it is a journey out of time into eternity.”