Nativity Epistle of His Eminence Metropolitan Hilarion of Eastern America and New York, First Hierarch of the Russian Church Abroad

With heartfelt love I greet all of you with the great, all-joyous Feast of the Nativity of Christ! 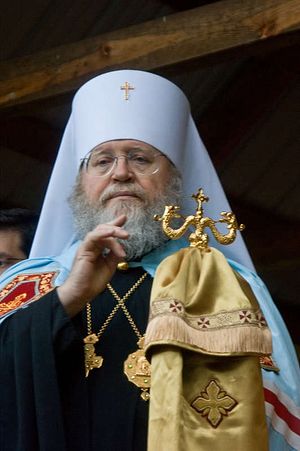 All that took place in the sacred cave of Bethlehem on that joyous night of the coming into this world of the Son of God bears a deep imprint of humility. The Omnipotent God Himself, the Creator of the world, the One who holds all in the palm of His hand, becomes a creature, one of us. He humbles himself even “unto death upon the cross,” all in order to save man. The most blessed Virgin, contemplating the mystery of our salvation, humbly accepts the prophecy of St. Simeon, who foretells the pain her motherly heart would endure, pierced by the double-edged sword.

Unknown by the world, the greatest blessing to mankind, the birth of Christ the Savior, was known by the angelic world and was glorified by them in their song: “Glory to God in the highest, and on earth peace, goodwill among men!” The dwellers of heaven were first to proclaim of the fulfillment of the promise given to our fallen fore-parents: “the seed of the woman shall crush the head of the serpent.” Hearing from the angel of the birth of the Savior of the world, the shepherds of Bethlehem traveled to the blessed cave — the cave that became highly venerated by all Christendom — in order to, like the Magi from the east, hasten to humbly pay homage to Him.

Contrary to a common understanding in the secular world, humility is not weakness of character. It is quite the opposite: only those who are unshakably convinced of higher truths can be truly humble in the Christian sense. Such were the Christian martyrs and venerable ones, who showed loving tolerance to those around them, but were immovable when it came to defending divine truths. Let us remember the great Elder Ambrose of Optina, who was born 200 years ago. For many years he endured severe illness. Yet through his spirit of humility, love and meekness, he healed the souls of all who came to him, ameliorating their sorrows. A feeble old man, he comforted the young and healthy, directing them to the blessed spring from which they could draw new strength.

As we venerate the manger of Bethlehem in spirit, let us entreat the Divine Child for spiritual peace, brotherly love and a genuine Christian existence, in order to become a source of comfort, support and joy for those who are close to us.

With love in Christ Who is born,