Navigating through Africa and Led by the Cross

It was an emotional service for several reasons. First, I had dreamt about what the Orthodox Church would be in Africa for a very long time and I was finally there. It was as beautiful and poignant as I had imagined. The deeply rooted traditions of Orthodoxy were being celebrated by a vibrant, musical, rhythmic people.
Tom Saba | 06 September 2011

“Khooo eees dis?” asked the man on the other line. It was both comforting and somewhat disorienting to hear the thick Greek accent on the other line of the phone. I introduced myself and explained that I was a medical student from Canada, working in central Ghana for the summer and would love to celebrate the Liturgy with him on Sunday morning. I had heard many good things about him and his ministry in West Africa.

His Grace Damaskinos, Bishop of Ghana and West Africa, was incredibly warm and helpful, but would be out of the district on the Sunday I would be visiting the Cathedral in Accra. He told me where the church was and I said goodbye, feeling closely connected to this man on the other line by our common Orthodox brotherhood, even though we were separated by continents and would unlikely ever meet in person.

The roots of Orthodoxy in Ghana date as far back as the 1920’s, when a man by the name of Bresi-Ando left the Methodist Church to seek out the true apostolic faith. During the next thirty years, Bresi-Ando founded the “African Universal Orthodox-Catholic Church” and suffered much criticism against his claim that this was truly an ancient church descended from the Apostles. Orthodoxy was viewed as a fabricated ideology. Although not a canonically recognized church, and isolated from the Orthodox world outside of Ghana, Bresi-Ando taught many non-Christians about the faith and directed them to a righteous way of life. When Bresi- Ando died, growth slowed down until a youth movement came across a book titled “The Orthodox Church,” by Bishop Kallistos Ware. The claims of Bresi-Ando were accurate: the Orthodox Church existed. With the help of some of our cherished church leaders, such as Fr. Meyendorff and Fr. Hopko, the Orthodox faithful of Ghana were welcomed into canonical Orthodox Tradition in 1982. Several Ghanaians were ordained and thousands more were baptized.

At 4:00 am the next day, I was enroute to the Cathedral, trying to sleep under the bright lights and loud music on the bus.

I arrived in Accra, weary and exhausted by the heavy heat, and somewhat disoriented, but managed to find the students’ hostel despite some sketchy directions. It would have been amusing that every young Ghanaian man pointed in totally opposite directions when I asked where the hostel was, but I was lost and needed a place to sleep! Finally, after several wrong turns, I found a bed at the students’ hostel and opened my suitcase. Much to my dismay, I realized that a bottle of sunscreen had exploded in my bag. This would not have been a problem … had the plumbing been working. Oh well, I thought, this was the Ghana experience. 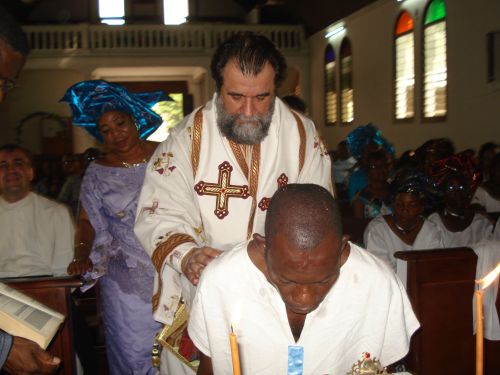 On Sunday morning, I awakened unable to contain my excitement! Eagerly, I flagged down a taxi in my “put on a serious face and pretend you know what you’re doing so they don’t rip you off” best performance. We agreed on a price, both thinking about how clever we were to have bargained so well. We drove for over an hour, twisting and turning, jostling and plodding on dirt roads and places not meant for cars or anything with wheels. The sun was rising higher and higher in the sky and I was starting to get anxious. The Bishop told me vaguely in which part of town the church would be found, but none of his markers came into view. The taxi driver was growing impatient and began increasing his price. My bargaining skills were eroding with each new bump and twist in the road. “Go to Newmarket in the Legon district and you should see the church” … or was it Newtown … or Newman? There was no church in view.

Furthermore, not one person in the vicinity seemed to have any idea what I was talking about. The driver insisted I call someone to get directions, but the Bishop was in Nigeria and my phone had expired. I was worried I was going to be stranded in Newmarket, or was it Newtown or Newman? Just as all hope seemed to be lost, and I was about to ask him in futile resignation to take me back to the bus station, I saw a beacon in the distance — a gold, commanding Orthodox Cross peaking over the low buildings, reflecting the early morning sun. I couldn’t contain my joy — “THERE IT IS!” I yelled.

I swung my oversized bag off my shoulders and walked around the church, enjoying the serenity, a far cry from the noisy dormitories and crowded market in Kumasi. A glance at my watch proved that I was perhaps over-eager in my attempt to make it to church — it was only 8:00 am. Liturgy wouldn’t start for another few hours, so I decided to walk around town a little. When I walked back to the church I was followed by two young girls, maybe four years old, who came running after me and tugged at my backpack. The two little girls skipped back down the dirt road and I, in my Sunday best, skipped right alongside them.

Back at church, I found myself a nice cool place between two windows; the early morning breeze was refreshing. I decided to sit at the rear to get a better view of the priest and congregation. The men all wore white shirts and black pants, whereas women wore festive, colorful outfits and matching headdresses. Father Daniel, an African-born priest, was replacing the regular priest and the Bishop, who were both out of town.

As he opened the Royal Doors to start the service, two birds flew into the window next to my pew — a welcoming from the Holy Spirit, I thought. The entire service was in Twi, the native language of the Ashanti region of Ghana. The hymns were sung with rich African harmonies and one could hear the passion and devotion in their voices. I tried to sing along, but my emotions got the best of me. My ear-to-ear grin, which was maintained throughout the entire service, revealed my sheer joy. I had never had so much fun at church.

It was an emotional service for several reasons. First, I had dreamt about what the Orthodox Church would be in Africa for a very long time and I was finally there. It was as beautiful and poignant as I had imagined. The deeply rooted traditions of Orthodoxy were being celebrated by a vibrant, musical, rhythmic people. The Ghanaian Orthodox service is the same as the one we celebrate in North America, although the chanting had a unique and richly Afro-Byzantine twist. As long as one knows the meaning of the chants, the language is not a problem. I eagerly participated.

Despite the uniquely African style, the service was peaceful and calm. The people of Ghana love to dance, they love music, and they love it LOUD! However, this did not detract from the fact that they were deeply involved in the service. It takes a patient and wise person to realize the joy there is in Orthodoxy. I looked around the church and beamed with pride.

Meanwhile, the Evangelical pastor at the church next door was giving a dynamic homily, including sound effects, dance music and a commanding message which nearly shook the walls of our small Orthodox church. In spite of this, the Orthodox faithful of Holy Transfiguration Cathedral maintained focus during the service, which is more than I can say for myself!

As the service came to a close, and we venerated the cross to the accompaniment of bongo drums, I danced back to my seat, thinking about the sense of community I got from this parish. At the time of the Offering of Peace, the women’s side of the church greeted each other, then the men’s side greeted each other, then both sides faced each other and waved. Deacon Daniel gave a very interesting homily (in Twi), but when he saw me in the pews, he repeated the entire sermon in English, with the rest of the congregation listening patiently.

When I left the church, I looked up at the cross one last time. Despite the fact that I was thousands of miles away from my friends and family, in a culture completely different from any I had ever known, it was the beacon that called out to me on the African continent, guided me to my destination, and led me home.