The aftershock quaking still continues and add damages on damages. The restoration work takes years and years. Long term support will be necessary. Specialist says much more longer than in the case of Kobe.
admin | 10 April 2011

The aftershock quaking still continues and add damages on damages. The restoration work takes years and years. Long term support will be necessary. Specialist says much more longer than in the case of Kobe.

Since the disaster happened, Bishop Seraphim and clergies in Eastern Japan Diocese have been making great effort to contact with parishioners and to get information on their situation. For the first two weeks, shortage of gas and damaged roads disturbed direct visit to their flocks.

Recently rubbles were pushed out from the main roads to the coast were opened to the traffic. On April 5 and 6, Bishop Seraphim visited the church and parishioners.

This is the short report with newest information we received.

In General, the damages of Orthodox communities were not in the worst level. Except Holy Annunciation Chapel in Yamada, all the church and chapels survived and stands fairly well at a glance. But examining carefuly, there found many cracks on the walls, damages on interior and exterior of the building and serious collaps on the foundation. And frequent aftershok quaking increases cracks and enlarge damages. It is supposed quite a big amount will be needed to restore and rebuild churches.

Among 1.5 thousands parishioners in Tohoku area; seven were killed by tsunami, one died from shock of the earthquake. In coastal area many losts their houses and job. Countless people had damages on their houses, shops and offices. Diocese has not yet had clear grasp of their situation. 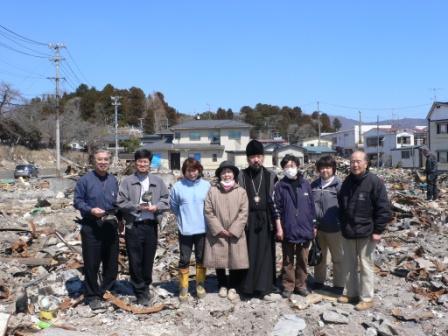 Half of the city was destroyed by tsunami and fire. The Holy Annunciation in Yamada had stood against tsunami, but tsunami delivered gas and oil on the surface, then in midnight, caught fire. The chapel was burned out. 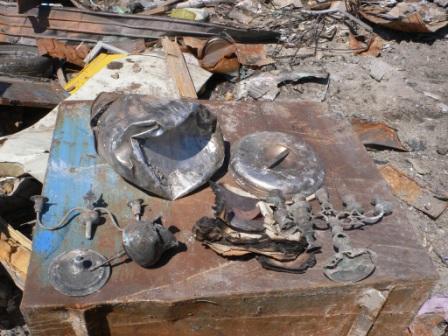 There are 15 families Yamada parish, most of them lost houses, shops and job. Matrona YOKOTA Nobuko is still missing. 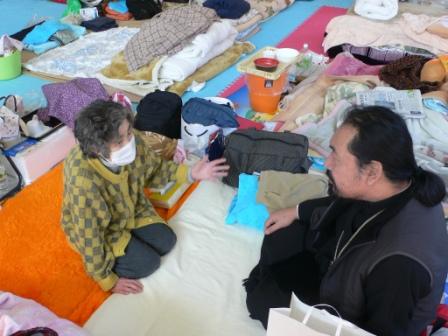 Bp. Seraphim visited Irina Chiba at the shelter in Yamada. Her house was swept away.

Most of parishioners are engaged in marine products business under local companies, which were totally devastated. They have no future prospect for income.

Holy Ascension Church was not destroyed but many cracks were found on the wall.

In addition to the three victimes(Lyubov ISE Miho, Peter ISE Taigi, Martha ISE Ai) informed in the previous report, one parishioner’s family member, not yet baptised, SATO Eigo is still not found.

The Holy Resurrection Chapel in Kesennuma, thanks God, was saved. Tsunami stopped in front of the church with a few meter distance. But now, a huge rock was found on the cliff just behind the chapel . If this huge rock fall down, the chapel will be crushed at one strike. To remove the danger, discussion is necessary with city office and the land owner.

Two families belong to Kesennuma parish. All of them are safe but their house and means of liveing, (they managed drug stores) were completely destroyed. After tsunami, they stayed in the shelter. This week, one family moved to a relative’s house and the other moved to church meeting house. 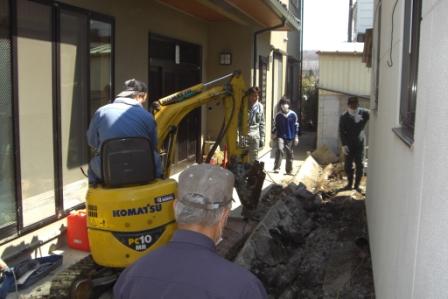 Water flooded in 40 cm depth into the church and left a lot of mud and dirt. On April 5, the members of Ishinomaki parish cleaned in and out of the church, with help of members from Sendai. 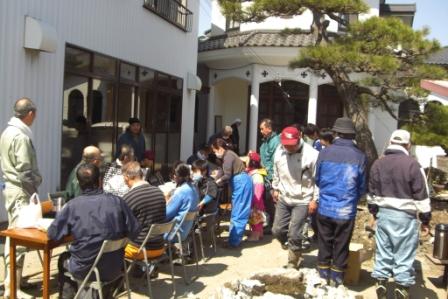 In addition to Nikanol Kami Tsutom (reposed), Andrei YONESATO Kimiyosi (was in the missing list) was found dead. His son Feodosii Hajime is still not found. 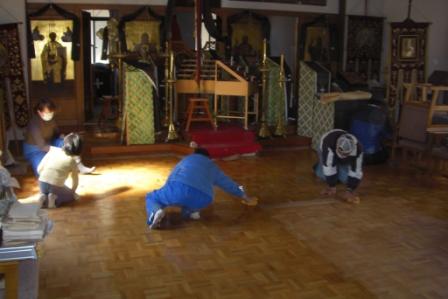 The destroyed church, shown in news paper and in many websites, is old church built in 1879, preserved as a city cultural asset in the Nakase sandbank park. The present church was built in 1978. 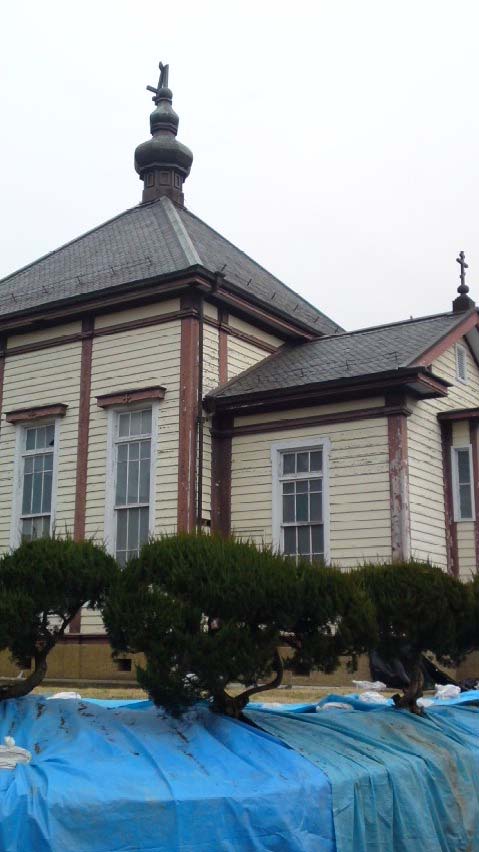 St. John the Apostle Church was built in 1934. By this earthquake, she got many cracks on the wall and collaps on the foundation. The bell tower is leaned. The estimated restoration cost is 60 thousand US$. After the estimation, a strong aftershock occured on Apr.7 and hit the damaged building; the cross on the cupola was broken, the cracks in the foundation became larger, mortars were peeled from walls. More money will be needed. 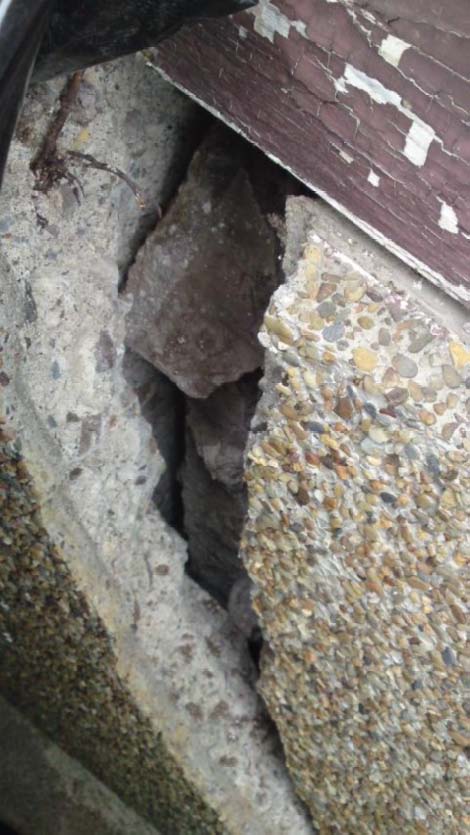 SENDAI(185 families,435 pax)
A parishioner’s family member, YAMAMOTO Michiko (not yet baptized) is missing. Due to repeating earthquakes and after shock, many cracks appeared on the office building next to church. Detailed investigation is necessary. After the strong aftershock, many of new cracks were found.

FUKUSHIMA (belong to Sendai parish)
There are two families living further than 30 km from the nuclear power station. Koyama family who lived within 10 km from the station moved to somewhere, according to their friend. 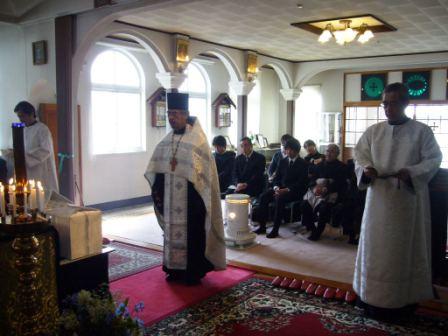 Panichida for the victimes at Holy Ascension Church in Sakari

SANUMA(9 families,13 pax)
The Holy Transfiguration Chapel stood against the earthquake, but distorted. Large scaled restoration or reconstruction is supposed to be necessary. 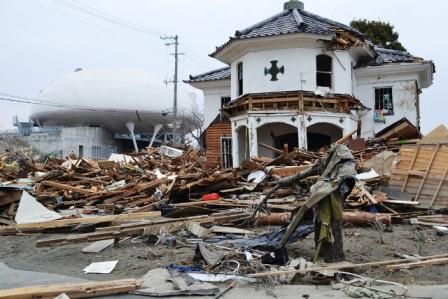 The old church building (now museum) was destroyed by tsunami.

The aftershock quaking still continues and add damages on damages. The restoration work takes years and years. Long term support will be necessary. Specialist says much more longer than in the case of Kobe.

The Orthodox Church in Japan started invite contribution for the church and parishioners suffered.

In detail, please see the official website of OCJ, recovered.
The Orthodox Church in Japan
http://www.orthodoxjapan.jp/
Relief donation from abroad